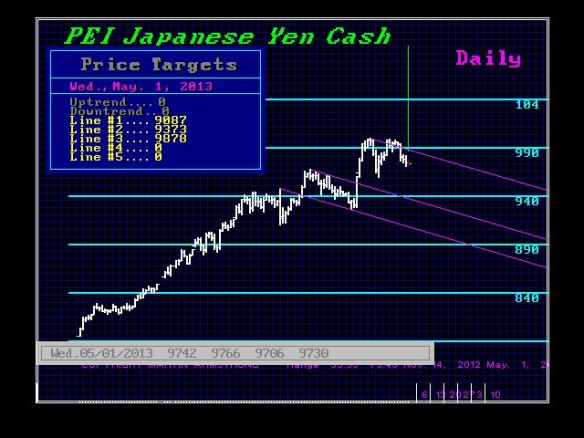 The Gallup Poll is out surveying the investment sentiment of American investors. Gold has held that top slot up until now. Gold has now fallen for the first time to the second position as investors return to the old historical investment sector – real estate. Even in Europe people are starting to move toward real estate as we should see a bounce into 2015. The surge in gold coin sales has not proven to be new investors, but those already in the market bargain hunting. Any surge bringing in new investors will need to wait for the next rally.

So far everything appears on track with volatility rising making counter trend reactions strong yet going nowhere as in the yen and euro. In the Euro for example, the Weekly Bullish is in the 13900 zone which is far from the recent low reflecting the amount of volatility within the system. The Japanese yen declined and the dollar made an effective double top at the 99.93 level. This is a big psychological area being par 100. Japanese institutions took profits selling foreign assets since it was the first 20% profit they have seen in 23 years. Nonetheless, only a daily closing BELOW 92.75 would suggest some follow-through. Here we will see most likely a 3rd test of the 100 level, and it may be the 4th time that we plow through it. The highest monthly closing has been 97.40 on the cash. A monthly closing above 97.76 will signal we are starting to breakout, Technical support begins at mid 9300 area with the critical intraday support at the 9000 level. This double top formation is important for it will show the dollar rally that will put the most pressure on the entire global economic system and eventually force the US economy into recession starting 2015.75.

The best trading strategy under these conditions is to sell highs in the Euro according to time against reversals where the risk is the least. In the yen, buy the dollar against support below or on the breakout when that unfolds. Both the euro and the yen are reflecting that we are indeed in a bull market for volatility and when everything turns again with 2015.75 on the ECM, the volatility will be twice as high as what we experienced between 2007-2009. That is where we can see the next phase transition in gold. Don’t forget, gold has yet to test the 1980 high adjusted for inflation which standards at about $2300 level. So forget the hype. Gold has NOT broken out yet nor has it truly made new highs in REAL terms – only nominal.