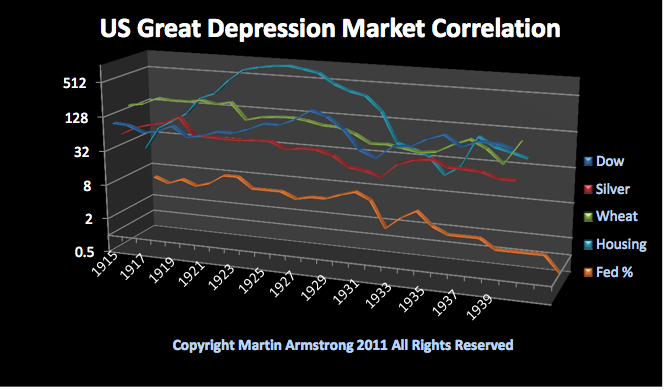 There is no question that real estate has been one of the (5) primary sectors within the economy. Real estate speculation has been systemic. In effect, it was the inspiration behind both the South Sea Bubble and Mississippi Bubble of 1720. While I provided a forecast for real estate of the United States in the issue of November 15th, 2009, I have also written about the Athenian Real Estate Crisis and Speculative Bubble during the 4th Century BC in the October 2010 issue.

Real Estate Bubbles often preceded serious economic declines. The US Great Depression of the 1930’s Market Correlation shows the layout of the various sectors. The commodities peaked with the Great Bubble of 1919 and generally declined into 1932. The stock market bubble was brewing headed into 1929 shifting from the Railroad stocks that peaked in 1907 to the first Industrial stock boom lead by the automobile industry. Howevever, you will notice the biggest bubble was in Real Estate (TOP LINE). The most famous Real Estate Bubble going straight into 1925 was the Florida Land Bubble. People were building places, selling them to other investors, while there really was nobody actually living in a lot of the places. That was no different than the Real Estate Bubbles of the 1790’s.

Ed Note: This is the first two paragraphs plus Canada of a 33 page report analysing every significant real estate market in the world. Martin does all of the historical analysis going back 1000’s of years, and Petra Gajdosidova does the markets today. Go HERE to gain a per access service to Armstrong Economics specific forecasts for time & price.

The Canadian housing boom shared some aspects of the US boom, including low (5%-10%) deposit and for a short period, no money down mortgages. The houshold debt to income ratio has continued climbing steadily for the last decade and is now at US and UK levels. The value of housing related debt in Canada has nearly tripled in the last decade to C$1.3 trillon (Bank of Canada). A large percentage of Canadian mortgages are insured by the Canada MOrtgage and Housing Corporation, i.e. the taxpayer (CMHC) insurance is required for all mortgages with less than 20% downpayment).

While some Canadian cities offer reasonable affordability compared to household incomes, Vancouvers housing is, by any measure, highly overvalued and vulnerable to a sharp correction. Prices have risen 55% from their 2009 trough to a level 29% above their prior peak. The average home price reached nearly C$800,000 (according to CMHC).

Strong Asian demand has provided a boost to already high prices. Thousands of mainland Chinese have moved to Vancouver (following the earlier waves of immigration from Taiwan and HK); thousands more invested in (mid-range to high end) real estate in order to park their cash in a stable Western country and/or to set their children up at Canadian colleges and with eventual Canadian citizenship, all driving prices to what are now clearly unsustainable levels.