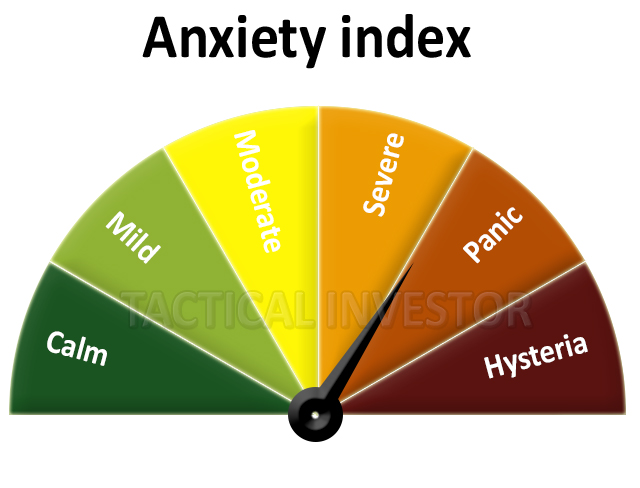 In the sphere of thought, absurdity and perversity remain the masters of the world, and their dominion is suspended only for brief periods. Arthur Schopenhauer

The proverbial question for many years has always been; when will this stock market bull end? By every measure of logic and or common sense, this bull market should have crashed years ago. However, it hasn’t, and much to the angst of many professionals continued its march upwards against all the odds. We would like to stop here and state that this market is now very close to trading in the extremely overbought ranges. A market can trade in the overbought ranges for an extended period. In this instance, we analysed monthly charts, where each bar represents a month’s worth of data. Historically, a market has experienced a correction within 5-10 months from the occurrence of this event. As of yet, the markets are not trading in the extremely overbought ranges on the monthly charts, but they are very close to moving into this zone.

Why has this market defied the expectations of all the professionals?

One of the culprits could be the emotional state of the masses. There is something almost insane taking place in this bull market; the higher it trends, the more anxious individuals come. It almost does not make sense as the opposite of this is what normally takes place. Were we not experiencing this first hand, we would find it almost impossible to believe such an event could occur. We update this gauge every two weeks, and the last reading shows that the masses are still firmly entrenched in the anxiety zone. Sadly history also indicates that bull markets never end on a note of fear or angst but on a note of extreme joy/euphoric. We don’t want anyone to lose that is not our desire; all we are doing is simply examining historical trends both from a price perspective and a mass psychology perspective. Thus it appears that this market will only crash when the majority finally decide to embrace this incredibly resilient bull market. The BBC Global 30 Index provides a macroeconomic view of the global economy; the index is trading well above the main uptrend line, clearly indicating that the Central banker’s ploy is working. The idea was to flood the system with money and create the illusion that all is well. This strategy has paid off handsomely; the stock market took off and in doing so created the illusion that all is well. Now the Fed’s have taken it one step further and are raising rates after holding them down for so long to further cement the illusion that all is well. The Bond Market should have crashed, but appears to be trending upwards instead. Two reasons for this are; central bankers worldwide are still lowering rates or maintaining a low rate environment as their economies are still far from healthy. This makes our bond market look more attractive (safe-haven bet and higher rates), and this outside demand for bonds is overriding these effects of a rate hike. We will expand on this concept in a future article, but suffice to say; the Fed might be raising rates to give it more room to wiggle in the future. Two leading economic indicators continue to illustrate that the global economy is far from healthy. Either they are both wrong, or the Fed is lying.

Real factors illustrating the Global Economy is far from healthy

Copper and the Baltic Dry Index are performing miserably because there the global economy is a lot weaker than the rosy picture central bankers are painting. In fact, there is absolutely no reason for them to raise rates; the only reason they are doing this is to create the illusion that the economy is strong. This index could drop all the way down to 7400, and the outlook would remain bullish. There is a good layer of support in the 9000 ranges. A correction would probably end at this level. If you look at copper you can see that the market has been smashed; in all previous bull markets, copper trended upwards with the market. The picture painted by the Baltic Dry index is not any prettier; therefore, in reality, this recovery is nothing but an illusion. In 2008 this index was trading above 11,400, but today it trading at 855. This is what a crash looks for this index has dropped over 90% from its highs, yet hardly anyone focuses on it.

Now we could go on and on about how terrible things are for that is what the Naysayers love to do; focus on the negative for fear sells. But we won’t continue with this storyline for even though the data is valid; at least for now it is useless. The world has been sold a lovely story, and for the most part, they have bought it. One they will awaken and see that the emperor was never handsome and well dressed. Instead, he was an old fat man who was walking around practically naked.

There are other forces at play here, and the main one we stated at the onset appears to be sentiment. The majority are still very anxious, and it is hard to see how a market could crash when the crowd has not embraced it. A strong correction is more likely, but many individuals will confuse this correction for a crash, but that is a story for another day.

Logic dictates that this market should crash. Were it not for the Feds massive infusion of cash into the system; this stock market would have crashed a long time ago. However, as things stand, the sentiment is far from positive, and the global economy is far from strong. Most nations will continue to support a low rate environment in a bid to prevent further damage to their economies. This in turn will make our bond markets more attractive, and foreign money will continue to pour here, which in turn will most likely continue to curtail the effect of rate hikes. Eventually, the Fed will be forced to lower rates again as the economy starts to shown signs of impending weakness. If the global economy were healthy, then copper and the Dry Baltic Dry Index would be trending upwards.

In general, we prefer the term correction (mild, strong or back breaking) because a crash is meant to indicate the end of something, but almost every crash has proven to be the beginning of a new bull run. The best time to buy a stock is when the crowd is scared to death. This bull market will experience one very strong correction, but it will not mark the end of the bull, but the last leg of a very spectacular run. This spectacular run will end, and then we will experience meltdown that will eventually create another once in a “lifetime buying moment”.

Absurdity. A statement or belief manifestly inconsistent with one’s own opinion.