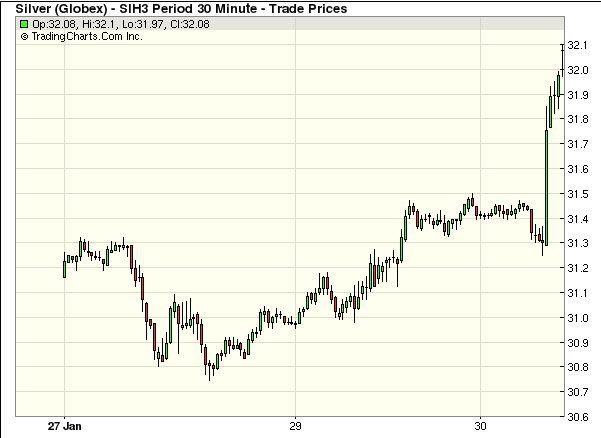 With Gold & Silver up sharply this morning, it might pay to look at what the GodFather of Financial writers the 89 year old Richard Russell had to say 5 days ago – Ed

Richard Russell: “The chart below almost speaks for itself.  Spot gold is in a rising trend and is touching its 50-day MA.  The nearby target is to climb above 1700.  There has been terrific resistance to gold’s rise — it’s as if every penny higher has been fought against by the anti-gold group (and who could that be but the Fed?).  RSI and MACD are both bullish:. “GDX has been a lagger, both in the general market and a laggard vs. gold.  I think this ETF (holding the larger gold mining shares) would be a good item to put in your portfolio and forget about.  The gold mining stocks have big leverage to gold — if or when gold finally takes off”. “GDXJ is the ETF containing the speculative smaller gold mining stocks.  My advice, take a small position in GDXJ and forget about it for a while.  MACD is bullish.  I think it could be a surprisingly good long-term holding.  But for GDX and GDXJ you are going to need patience” Getting back to the general market, the Transports are surging into record high territory.  All that’s needed now is a confirmation by the Industrials.  The Dow closed yesterday at 13,712.13 just 452 points below their record high of 14,164.53 established in 2007.  Below we see the Dow, climbing up a steep trendline. “The public is bullish.  The retail investors are the most bullish they’ve been in four years.  Volume implications and MACD are bullish.  RSI is about to enter overbought area.  So shouldn’t the Dow climb to new record highs?  Sure, so what’s stopping it?  Just that old axiom, “The best laid plans of mice and men” — Then we have Russell’s axiom — There’s only two sure things in the market — surprise and uncertainty!”