Quality Companies “thrown out with the bathwater.” 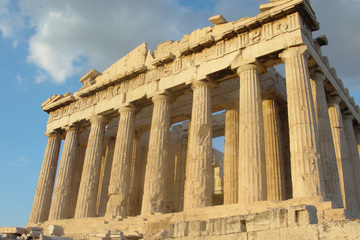 Greece intends to default tomorrow. Ryan Irvine notes that “the last time the market ran for cover in the face of Greek default was actually an excellent time to buy some quality companies. Ryan suggest 5 quality companies below – Money Talks Ed. Greece Back in the Spotlight as Debt Default Looms Once Again

For being a relatively small country (population of less than 11 million), Greece has taken its share of the spotlight in the global financial crisis. In Europe, it has been at the epicenter. News centers were firmly focused on the struggling nation back in 2010 and 2011 when the European Union (EU) and International Monetary Fund (IMF) negotiated two separate bailout packages for a total value of €240 billion. Since then, news of Greece’s financial woes has (at least in North American) fallen somewhat into the background…until now.

For anybody wondering why the TSX Composite index is down more than 300 points today (with similar declines throughout North America and globally), look no further than Greece’s return to the foreground. The country is expected to default on a €1.55 billion (about US$1.73 billion) loan to the IMF on Tuesday. Missing this payment to the IMF means that Greece will technically lose access to the flow of bailout money it has been receiving. If the situation is left unresolved then much larger defaults will occur from Greece later in July.

To provide a short history lesson on the subject…Greece is a member of the European Union (EU) and adopted the Euro in 2001. In October 2009, one year after the global financial crash, the Greek government fessed up that it had artificially understated its budget deficit in order to meet EU standards for adoption of the Euro. What was once officially quoted as a budget deficit of 6% of gross domestic product (GDP) was restated several times over the following year to over 15%.

How did this happen? New and complex financial products allowed the country (this was of course not limited to Greece) to increase indebtedness without technically having to report new debt. This reminds me of Warren Buffett’s quote, “everyone floats when the tide is in, but when the tide goes out you see who has been swimming naked.” It was easy for the world to play financial alchemy when the economy appears to be on solid footing and investors are bliss but it is when the outlook dims and investors want to access their capital that financial melting pots start to explode. As was the case with Greece and much of rest of the world.

At the time, Greece was so firmly woven in the EU financial system that many feared a full debt default would be catastrophic for Europe and would send ripple effects throughout the global economy. The result was that the EU and IMF agreed to bail Greece out…but this came with a price…AUSTERITY. Greece had to agree to pull itself up by its financial bootstraps, reining in government spending, clawing back social programs, and cracking down on what was some of the most rampant tax evasion known to the Western world.

The concept of “financial austerity” is extremely sound. You can’t (or shouldn’t) spend more money than you have. This is what Greece was doing. Of course, this is what essentially the entire Western world has been and continues to do. But in the case of Greece, the gap was much wider than average. The problem now is that the cut backs in spending mean that Greece’s economy is stuck in a rut with over 25% official unemployment. This is a depression, not a recession and it makes things difficult for a country that wants to get back into the “black.”

Tough times in Greece have led to a disenfranchised population, many of whom believe that the rest of the EU, particularly Germany, are actually benefitting from the misfortunes of their country. This led recently to the election of a left wing government on the promise that it would end austerity measures. A referendum on the subject is currently scheduled for July 5thwhereby the Greek people will accept or reject the terms of the country’s creditors. If Greece does not come to an arrangement with the rest of the EU and the IMF then all bailout money will cease to flow and Greece will default on its scheduled debt payments.

What this means for investors around the world is debatable. If Greece doesn’t eventually come to terms with its creditors then it is hard to imagine a scenario whereby they stay in the EU and continue to use the Euro. The general consensus is that the global impact of this would not be as extreme as it would have been a few years ago given that Europe has had more time to prepare for the ramifications. The US economy also appears to be on much better footing which should provide some extra support for the global economy.

We would certainly expect to see a stiff short-term kick to global financial markets if the situation deteriorates. However, we will also note that the last time the market ran for cover in the face of Greek default was actually an excellent time to buy some quality companies that were “thrown out with the bathwater.” In the short term, these kinds of events tend to result in waves of fear that impact companies which are not directly affected by the underlying issue. Such events should be considered opportunities. Recent history has demonstrated that it is the investors that made “knee jerk” and emotional reactions to these events that lost money. While the investors that haven taken a calm, rational, and long-term approach to the matter are the ones to have benefited.