“There Is No Exit from the Fed’s Stimulus” 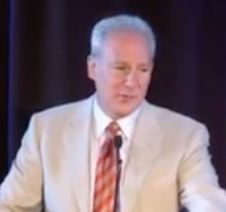 While central bankers gathered for their annual Wyoming meeting, another group of free-market activists held The Jackson Hole Summit. In his speech, Peter Schiff succinctly explained how the Federal Reserve simply postponed the 2008 economic disaster. Despite promises, Janet Yellen has made no progress towards shrinking the Fed’s balance sheet to $1 trillion by the end of the decade. This massive balance sheet is exactly why the Fed cannot raise interest rates. Since 2015 could be the worst year of GDP growth of the entire so-called recovery, the Fed is trapped – it will continue on this easy money path until the US dollar has been destroyed.