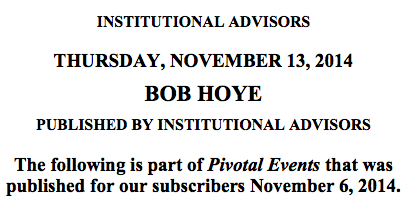 We have been hoping to see anecdotes about diminishing speculation.

“Russia boosted gold reserves by the most since defaulting on local debt in 1998, driving its bullion holdings to the highest in at least two decades.”

It is worth noting that this policy is likely more due to sound banking than to speculation.

“The credit quality of U.S. Commercial mortgages being packaged into bonds slipped further as borrowers piled into more debt.”

“Wall Street banks are either absorbing losses or getting stuck holding some of the riskiest corporate loans they agreed to underwrite [just] before the biggest rout in more than two years.”

“Goldman: The Risk Of A Stock Market Crash Is Low.”

The article included that the model was based upon “Historical price data from 20 advanced economies.” It did not mention how long the data base was. Five years, or three hundred years?

“The Republican wave that swept the states left Democrats at their weakest point since the 1920s.”

We will stay with our theme of 1-Exuberance, 2-Negative Divergence, 3-Volatility and 4- Resolution.

Condition #1 prevailed from July until September. Highlights were bearish sentiment dropping to 13.3%, the lowest since 1987; and the S&P registering Monthly Upside Exhaustions – not seen on this

Condition #2 had the Small Caps and the STOXX setting highs in the summer and then taking out key moving averages.

Condition #3 had the VIX turning up in August.

Condition #4 “Resolution” clocked a 10% correction but has not recorded a setback proportionate to the degree and duration of financial speculation. The Fed, BoJ and the ECB are still in a highly speculative mode. Well, they did use reserves to buy equities. Modern central banking please meet modern portfolio theory.

The S&P rebound out of the Springboard Buy of September 17th has become somewhat overbought. How far can this rebound go?

We should look at “What is in the market?’.

Other than everyone, “news” about the ECB1 buying is in and so is the remarkable push by the Bank of Japan. And the news about one of the most profound election wins in US history is “in” as well. It will take many years to repair the damage done by the Obama administration. What’s more, he will impose a “scorched earth” policy before leaving.

Recall that his objective has been to trash the economy and the middle class by overwhelming the welfare system. All according to Saul Alinsky. Although more of the media are now describing Obama as incompetent, this is not the case. He has been remarkably successful in imposing his personal vision of the “new” America.

Other than a voluntary and sudden retirement of the president, we can’t think of any other sensational policy moves. However, the Republican “wave” could temper the ambition of the Federal Reserve System. Perhaps from Reckless 2.0 to Reckless 1.0.

Earlier today, the DX made it to 87.91, a new high for the move. Quite likely the rally from the breakout at 81 in July to 86 in early October was tied to the “correction” in the financial markets. The rally from 85 in mid-October was due to the rebound when the “world” was buying US stocks and bonds.

This week it is tied to the remarkable change in US politics and the crashing ruble.

For those who are obliged to service debt with US dollars into New York the burden is increasing. In the volatile times of the 1550s, Gresham was Elizabeth’s advisor and agent in the money market of Antwerp. In a number of letters he explained the problem of servicing debt from a weak currency to a strong one.

This has been the best explanation of why the senior currency is chronically firm in a post-bubble contraction.

The Canadian dollar has slumped with crude oil, which has forced the Weekly RSI down to 32. A little closer to 30 would be oversold enough to limit the decline.

We have been looking for crude and copper to decline on seasonal forces into December.

The highlight is the plunge in crude oil and the momentum is down to a Weekly RSI of 21.57. This is approaching the level that could limit the decline. That would be under “normal” market conditions going into a seasonal low.

However, in this year’s discovery of volatility has seen failures from an oversold condition. For the DX it has been extensions in the rally from overbought conditions. Also there is the attractive possibility of Russia suffering a sharp decline of petroleum income. It happened when crude crashed from late 1985 to spring 1986.

The chart of the crashing ruble follows.

Last year’s “cold weather” rally in natural gas essentially began from a dip into November to 3.38. The rally made it to 6.49 in February. We have been looking for a similar trade this year. The low was 3.55 two weeks ago and has jumped to 4.40 yesterday. If a financial storm develops the action could become volatile.

Copper has been expected to set a tradable low sometime in November. The high on last winter’s “Rotation” was 3.11 and the price has declined to 2.95 in mid-October. The relief rally took it to 3.11 and the low needs to be tested.

Grains (GKX) have had the best indications of stability and then a rally. The low was 290 at the first of October and has been 323 a couple of weeks ago. It is in a modest uptrend, tempered by the firm dollar.

Wednesday’s Special Report on gold updated our big perspective on precious metals. The point to be made is that it does not endorse the “gold and silver bug” culture that grew out the 1960s and seems to have reached its ultimate passion in 2011. This has always rested upon the utterly immoral theories and practices of interventionist central banking.

The action since the peak in 2011 is likely a transition from the old school of research to the “new” paradigm of gold’s behaviour in a long post-bubble contraction. In which case, investment in gold shares will be the key to good returns. With a chronically firmer dollar the old paradigm of making the gains from dollar depreciation relative gold may be limited to brief trades.

Precious metals markets over the next few weeks will be interesting. Traditionally, gold stocks lead the change in bullion prices. So what we are looking for now is for the HUI to outperform gold. With this, gold would follow with a rise in dollar terms.

HUI/Gold was down to 22 yesterday on the Weekly RSI, which is very oversold. The ratio of HUI/GLD set a new low of 1.33 at yesterday’s close. It is up around 4% today, which seems to be a good start. However, it will need some technical work before we can call a new bull market for the sector.

Gold’s real price rising since June is likely the start of a cyclical bull market which is very constructive on the longer term outlook for the precious metals sector.