“The prettiest horse in the glue factory” 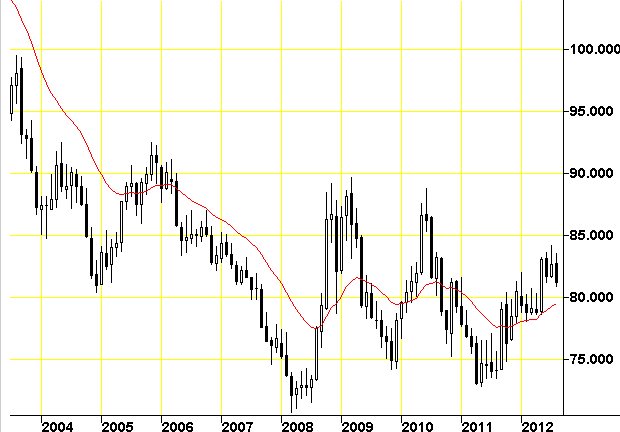 US DOLLAR AND CURRENCIES- SUMMARY

Spain successfully sold 4 billion euros of 3 and 6-month bills on Tuesday, although yields were higher than the previous auctions. Spanish Prime Minister Rajoy on Thursday is expected to unveil additional austerity measures when he presents his 2013 budget. Italy today successfully sold zero-coupon 2014 bonds at 2.532%, down from 3.064% on Aug 28.

The GfK Oct German consumer confidence index of 5.9 was unchanged from September’s 5.9 and was in line with market expectations.

The Euro was up .22% against the Dollar.

The Yen was down .05% against the Dollar.

China’s Aug leading economic indicator rose 1.7% m/m after a +0.6% m/m gain in July, which was a possible sign that the Chinese economy is stabilizing. Positive factors in the leading indicator included a rebound in real estate and credit growth, and an improvement in consumer expectations. The market consensus is that Chinese GDP likely eased to about +7.4% in Q3 from +7.6% in Q2.

China’s central bank today injected a record 290 billion yuan ($46 billion) into the banking system to address a liquidity squeeze ahead of next week’s Chinese holiday week.

As long as there is faith in the dollar and fiat money as a whole-and by and large there is, I see the system holding together for quite a while. I think it’s Ian McAvity who calls the dollar “the prettiest horse in the glue factory.” This became dramatically evident this week.

Owning Dollars other than for trading purposes is a fool’s bet in my opinion. As a long term plan, you should be looking to exit Dollars and move into hard assets or strong natural resource based currencies. I particularly favor the Canadian Dollar. Other choices include the Australian Dollar, the Singapore Dollar and, of course, the Chinese Renminbi. My view is that we’re ultimately headed back to the March 18, 2008 low of 70.698 and will later see 66.00 or much, much lower, possibly even the 30.00 area. This could occur between 2014 and 2018. Short-term (between now and early 2013) we should see the 73.00-74.00 area. For political reasons we may never experience the sudden overnight sudden devaluation as seen by Argentina, Brazil or Mexico in recent decades, but instead continue to see a slow diabolical deterioration. -Ed Note: Try Mark Leibovit’s Special Trial Offer HERE