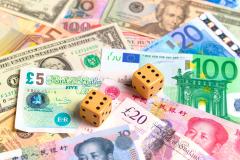 As countries try to weaken their currencies to boost exports, the risk of a currency war similar to events seen in the 1930s has heightened and policymakers are making sure they are on the winning side, according to Morgan Stanley.

The balance of power now rests with Japan, according to the bank, as Japan’s policy-makers’ more dovish approach looks set to bring the world a step closer to a currency war.

The Bank of Japan doubled its inflation target to 2 percent in January and made an open-ended commitment to continue buying assets from next year. This follows a leadership change, with new Prime Minister Shinzo Abe openly calling for aggressive monetary stimulus from the country’s central bank.

This move, Morgan Stanley said, is a “game changer” as Japan tries to invigorate its stagnating economy .

“If a weaker yen (Exchange:JPY=) is an important pillar of the strategy to make this export-oriented economy more competitive again, it brings into the picture something that was missing from earlier interactions among central banks of the advanced economies – competitive depreciation,” it said in a research note.

“This, in turn, takes us one step closer to a currency war.”

Manoj Pradhan, an economist at the bank details the 1930s war and highlights the lessons that we can learn from the past.

The U.K. was the first to leave the gold standard on September 19, 1931 due to painfully high unemployment. Sterling depreciated, setting off a volatile chain of events with the U.S., Norway, Sweden, France and Germany all following suit.

Those countries that moved early benefited at the expense of others on the gold bloc, a “beggar-thy-neighbor” outcome, according to Pradhan.

“Similarly, it is the domestic agenda that could drive competitive depreciation today,” he said.

“Since global demand is likely to remain sluggish, a revival of Japan’s export sector on the back of yen weakness is likely to eat into the market share of other exporters – something that could well invite measures to curb significant weakening of the yen.”

(Read More: What Could Really Spark a Currency War)

In a detailed scenario of what could follow, Pradhan highlights that the European Central Bank and theFederal Reserve would ease further, using quantitative easing to dampen euro strength and debt ceiling fears.

Capital controls could be brought in by Latin American and other Asian economies, he said, which could be transaction taxes or even some sort of verbal interaction.

“In the particularly interesting cases of Korea and Taiwan, our economist Sharon Lam believes that verbal intervention (already under way to some extent), intervention in the foreign exchange markets and capital controls represent the most likely policy reactions,” he said, adding that the emerging markets of Colombia, Mexico, Peru and Chile have even u-turned towards a more dovish stance.

“While a currency war is not our base case, the new-found commitment of Japan’s policy-makers does raise the risk of retaliatory action to keep the yen weak,” he said.

“The experience of the 1930s suggests to us that such large currency crises are likely triggered by domestic issues, and that they do create distinct winners and losers. EM (emerging market) policy-makers are already gearing up to make sure they remain on the winning side, but the balance of power for now rests with Japan.”