“The Greatest Garbage Market in History” 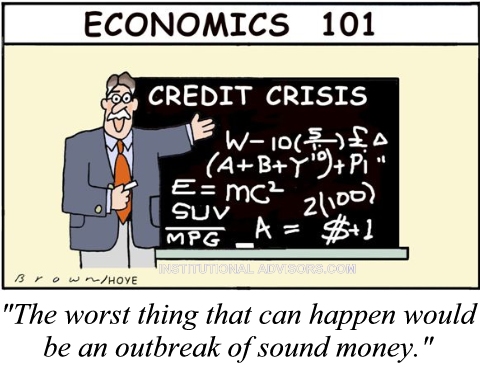 “Fed’s Fisher: We Cannot Live in Fear of ‘Monetary Cocaine'”

What are these guys tripping out on?

“Goldilocks: This Was the Perfect Job Report for The Market.”

Whatever it is, they seem to be smoking it as well.

Ed Note: Notice the name of one of the Cartoonist’s In the madness of the “Roaring Twenties”, the head of the New York Fed, Ben Strong, wanted to give the stock market a boost. In 1927 he wished to impress a visiting central banker from France and used the term “coupe de whiskey”.

The last time we referred to the “Coupe” in earnest was in November of 2007. Some years ago, Paul McCulley, then at Pimco observed “When the Fed is the bartender, everybody drinks until they fall down.

Then there is the spoilsport:

“Obama: ‘We don’t want to tax all businesses out of business’.”

With his ambition for unlimited government, this should be read as just the industries that interventionists like such as wind turbines and solar power.

In the middle of April the scramble to buy risky bonds was another example of “reaching for yield”. That was one compulsion and it was backed up by “Confidence mounts that central banks will prop up debt markets through year end.”

Essentially the best for the bond future was set at the end of April and the best for lower- grade stuff was set in early May. As of this week, the initial whack has been severe enough that establishment is worrying about “disorderly”.

Our May 9th Pivot described the huge issuance of doubtful bonds as the “biggest Garbage Market in history”, and that what “central bankers propose and market forces dispose”.

Noted a number of times was that the bond frenzy was heading for a seasonal reversal in May. That governments were driving the action was discussed and compared to this time in 1998. That was the government tout that spreads in Europe would narrow. Backed by central bankers, LTCM bet the farm on “Convergence” and the crash was monumental. This disquieting event was also cited a few times.

On this spring’s mania, we noted that once the reversal was accomplished around May, lower-grade bond markets would crash in the fall. “Disorderly” is the polite term for a bond market crash.

There could be times when liquidity pressures will encompass long treasuries. Under such conditions most equities and commodities could suffer forced selling.

The storm in the credit markets has been developing over the past few months. Perhaps a pause is due, but the turn is severe and points to a lot of forced liquidation in the fall.

On the stock market, the VIX rising though 19 would mark the breakout from complacency.

On currencies, the DX rising through the 84 level would do it. As a general indicator, the gold/silver ratio rising above 63 would be significant.

In retrospect, the bear market for the precious metal sector started in the summer of 2011. The disaster in March-April created momentum and sentiment readings quite the opposite of the excesses recorded in 2011 and again last September.

That was a trip from one excess to the other. But beyond that it was a cyclical bear market for the sector as orthodox markets were accomplishing a cyclical bull market.

From time to time over the past year this page has wondered about when this opposite action would begin, Well, it was on, but we only noticed it earlier in the year.

The path to a cyclical bull market for this sector could still be difficult. Particularly when stocks and bonds are getting hit hard. At other times good advances are possible with eventually outstanding net gains being accomplished.

We would like to be more precise on this, but it is wild out there.

The sector is worth buying on the bad days.