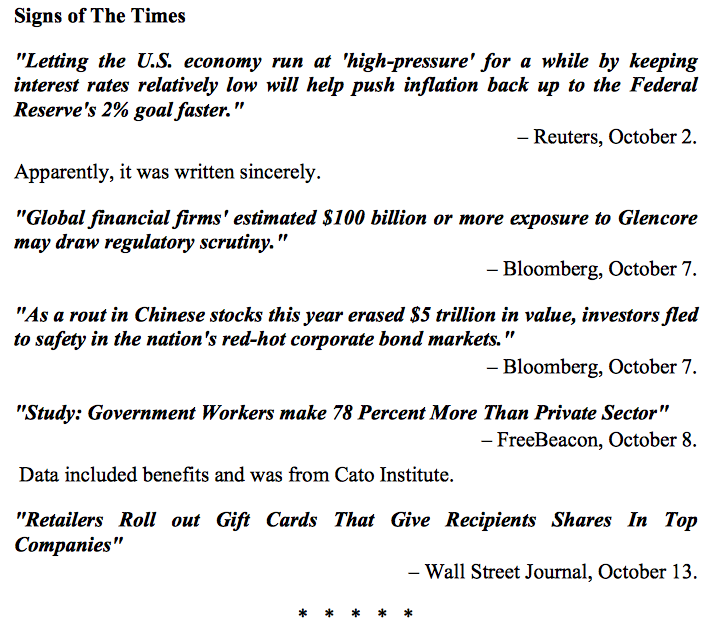 Our September 29th Pivot noted that “Seasonality could bottom some two to four weeks from now. Momentum has further to go.”

Last week we noted that the prospect for an intermediate low following the break below the 50-Week ma counted out to around November.

Is the low for the S&P of late September the key intermediate low?

The decline into Black Monday, August 24th was global and severe. Particularly for Shanghai. We had the close on the S&P on that day as the target for the test. In between, the CCI could have reached 100 on the rebound ().

The next low was tied to the panic about Glencore, which some compared to Lehman in 2008. As exciting as it was, it was more like Bear Stearns in June 2007. The first “discovery” on that contraction. Lehman in 2008 was the killer discovery.

However, the Glencore collapse suddenly reversed to a brutal short squeeze. A chart follows that shows that the US intervention through REPOS was massively greater than in 2008. Rebounds are natural, the latest had extraordinary assistance. 1

And now the bounce in the S&P has generated an Inverse Springboard, which is a “sell” in a declining market. Opposite to the Springboard of October a year ago.

Credit spreads widened into October 2nd with the Glencore setback. Some relief was possible. The huge and sudden REPO operation squeezed virtually everything in the universe. The High-Yield (PHDCX) rallied from 8.60 to 8.85 on Tuesday. The declining 50-Day ma stopped it for the fourth time since the key reversal in June. Spreads have done much the same.

On that breakout in spreads, the S&P took out the initial decline into November. The first leg of the bear ended at 1256 in March 2008.

Long Treasuries (TLT) held support at the 122.50 level, which was at the 50-Day ma. A couple of days of stock-market correction and TLT is up to 124, comfortably above the 200-Day as well.

The last high was 126 and that becomes our target.

As noted last week, the commodity rally out of August 24th was a natural, helped by seasonal strength for copper and crude likely into September.

Copper rallied from 2.21 to 2.49 in the middle of September. The next rally made it to only 2.44 on Monday. A seasonal low in November has been possible and taking out the October 2nd low of 2.24 would mark the decline.

Crude oil fared better. The August low was 37.75 and the high was 50.92 on Monday. The swing on the Daily RSI from very oversold has been rather good. Likely enough to limit the move. The high on the December contract was 51.5 on Friday and today’s low was 46.

A seasonal low late in the year has been possible.

Lumber sold off from 302 in June to 214 at the end of September. The rebound made it to 262 today. The swing from Daily oversold to overbought is impressive and the September low needs testing. Probably by year-end.

Grains (GKX) have done relatively well. The low was 273 in early September and the high was 300 two weeks ago. This was at the 200-Day and the next rally is attempting to get above the moving average which is declining.

The Canadian dollar traded close to 75 from late August. The last low was 74.31 in late September and now it is at 77.8.

The September 17th ChartWorks Gold Sentiment had a target in the 1145 to 1185 level. Yesterday’s and today’s high reached 1190.

From the 1100 low in September this has been a good move. From the 1072 in July it has been an outstanding rally. The Daily RSI has swung from very oversold at 18 on the Daily RSI to almost 70.

It is an impressive swing and most of the gain for this move has been accomplished. Gold is registering an Inverse Springboard that could become effective within a week or so.

Since the bear started in 2011 each rally from very oversold has been sharp and all too brief. The last example for gold stocks popped out of last December and got overbought in January. We left the play on the rally into May.

Thus our advice over the past few months was for stability, first.

This would show up as the GDX began to outperform the bullion price. Our September 29th Pivot noted that GDX/GLD index rising above the 50-Day would be constructive. That was accomplished on October 2nd at 130 and the rally has continued to 150.

GDX has rallied from the base at 13 established from early August to the last low at 13.19 at the end of September. At 17 now, gold stocks have accomplished a big momentum swing.

A correction for the sector has been earned.

The base that is building will likely be the end of the bear that started in 2011. It is setting up a cyclical bull market whereby the precious metals become a premier sector.