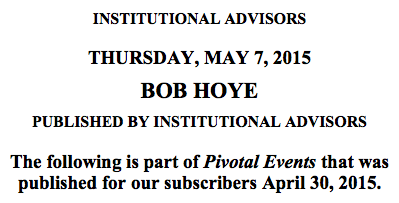 Signs of The Times

“$53 trillion of all global bonds have negative yields, of which 60% are European.”

“Central bank assets now exceed $22 trillion, equivalent to the combined GDP of US and Japan.”

Members of our Friday lunch group have been in the markets for a long time and recently we recalled a really blatant Vancouver promotion. It was so obvious that “even the crooks called it a ‘crooked deal’.”

There is nothing more dangerous than academic economists craving fame and Wall Streeters craving instant wealth.

This racket is becoming increasingly eligible to a bout of professional infamy.

“A four-year-old auto finance company…sold $149 million bond deal consisting of car loans made to borrowers considered so subprime you might call them–dunno–sub- subprime?”

“Wall Street’s biggest names are getting their mojo back. The results were particularly notable at Goldman, which received a big boost from its trading desk–a core focus for the firm.”

“Stunned…Despite soaring stock markets and low gas prices, Consumer Confidence tumbled to 95.2 (against expectations of a jump to 102.2. The March figure was 101.4).”

This is noted as the biggest miss since June 2010.

In the face of such remarkable financial speculation, it seems appropriate to review the intentions of policymakers. The notion of a “lender of last resort” was behind the advent of the Fed. That with a “flexible” currency would provide stability. After all–nasty financial setbacks that initiated recessions would be prevented.

Fabulous idea. And it is still a fable.
Now, why are stocks up when Consumer Confidence (CCI) is plunging?
CCI may not be moving on seasonal pressures, the stock market has been on a seasonal rally.

This goes back to October when the seasonal decline generated a Springboard Buy. The “natural” next leg up would likely run into around May. Other guidance was that when the crude crash ended it would prompt a stock market rally of around three months.

That gets us to, well, around now and there are no doubts about another eruption of private- sector speculative activity. Central banking is still controlled by speculators and they are still in a speculative mode.

And as we have been noting, this is the season when virtually straight-up action can erupt and then collapse. Our April 9th Pivot outlined that this could be accomplished within eight weeks. Next week is Week Four and in the US, IBB has been surging. New issues in China have been, as the saying went, “out of sight”. That’s in the number of IPOs and as in straight up.

Often this type of rally is called “parabolic”. Mathematically, this implies that the curve can be solved. This is not the case, as the ending action of a mania is a skewed growth curve and there is no formula for it. In so many words, a computer cannot solve it and predict its end.

There is the “analogue model”. Each such blowoff has had similar characteristics and the chart of one example overlays another example. The Daily chart of the South Sea Company (let’s call it SSC) in 1720 is remarkably similar to that of RCA in 1929, Cisco in 2000, housing was the phenomenon in 2007 and IBB is a good example now.

Representative examples in Shanghai seem to be taking a break from the rapture mode.

The record is that each bubble, in its day, was the greatest financial speculation in history. For each set of participants, a culmination was unthinkable. For those who were thinking it would be at a higher level.

In reaching for perspective, it is reasonable to conclude that this one really is different. It includes an global bubble in bonds that is without precedent. And it is coming apart–big time!

Last week’s conclusion in Stock Markets was: “We should soon start considering the probability of a liquidity crisis.”

The old Dow Theory has been providing some guidance. Non-confirmations by the Transports of the general rising trend has been “on” since the first of March. We have considered this as an alert, which is becoming more acute this week

Last week, the TRAN rally stopped at the 50-Day. This week it’s been below the 200-Day at 8700. The dive into early April stopped at 8527 and taking this out would set an intermediate downtrend. Taking out the October low of 7700 would be very bearish.

Biotechs (IBB) accomplished a surge to to 375 in March. This was sensational enough to register a “Trifecta”, which is Upside Exhaustions on the Daily, Weakly and Monthly readings.

Ross had an initial target, which provided support and the bounce tested the high at 368. The April low was 334 and at 334 now it is threatening that support. It is also well below the 50- Day moving average.

As noted, this surge of speculation is exceptional, which represents a compulsion that will not quit quietly.

Our view has been that the when the “around May” surge burns out, a summer of consolidation would be probable. Enough of a change in credit markets could force an overall contraction.

US credit spreads widened until the mini-panic completed in January. This was part of the crash in crude and narrowing lately is on a seasonal move that could end “around May”.

Last year’s reversal to widening started at 143 bps in June and the worst was 212 bps in January. So far, the best on this has been 176 bps this week. This is testing the initial “rebound” into March.

This correction in the main trend of widening could reverse within the next 4 weeks or so. Getting beyond 187 bps would technically resume the trend.

After flattening for some 16 months and it within the time window when reversal has been probable. The most for the move was accomplished a couple of weeks ago. Breaking below the 50-Day ma would be an alert to change.

Again, we should repeat our Consumer Product Warning. Reversals in spreads and the curve have anticipated significant contractions and, what’s more, the senior central bank has been unable to prevent the change.

Long-dated Treasuries soared to an exceptionally overbought condition in late January. Our special study of January 20th “Ending Action” called for the end of the great bull market that began in the financial crisis of 1981.

In a couple of Pivots, the comment was that the reversal in the US market would eventually encompass the even greater mania in European bonds.

Last Wednesday’s special on bonds observed that the German yield seemed to be reversing. That was at 0.10% and a break above 0.20% would reverse the trend. That was accomplished on yesterday as the yield soared to 0.29. Today it has reached 0.37%.

And the ECB was buying at below 0.10%. This blunder could rank with defending the pound when Soros was short in 1992.

Sure, the numbers are small but the change is big.

Using the TLT, the high for the US bond was 137.66 at the end of January and the initial low was 122.71 in early March. The rebound made it to 132.48 in late March. Since then the trade has followed the declining 50-Day ma. Declines this week have taken the price down to 124.51. It only took three days to plunge below the 50-Day

While the bull market for Treasuries was on, there was little point in reviewing the history of real interest rates (as adjusted for inflation). On every great bubble real long rates in the senior currency have declined to significant lows. In some cases such as in 1873 the yield declined to negative. In 1929 it did not. In 2007 the declined was to minus 1.5%.

The main thing is that on the five examples from 1720 to 1929 the typical increase was 12 percentage points. In the 2008 financial collapse the real yield jumped from -1.5% to +6%. Bad enough, but obviously not enough to end the abuse of the credit markets, otherwise known as a “New Financial Era”.

Generally, most commodities were likely to rally into “around May”.

Crude ended its crash in January at 43, which was tested at 42 in March. Now at the 59 level, the Daily RSI has had a huge swing from very oversold to almost overbought. The ChartWorks notes that momentum is enough to register a Springboard Sell, which could become effective over the next few weeks.

Energy stocks (XLE) have rallied from 71 in January to 83.25 earlier today. This touched the 40-Week ma, which represents resistance. It is a good gain in a volatile world and money should be taken off the table.

Commodity index, DBC, has rallied from 16.84 in January and the test at 16.71 in March. Now at 18.25, the RSI has had a good swing from very oversold to almost overbought. There is resistance at the 18.40 level and there is only a few weeks left on the favourable season.

Within this, base metals (GYX) set lows at 300 in January and March. The latest rally bounced off the 50-Day and is accomplishing an outstanding swing on the Daily RSI Mining stocks (SPTM) have rallied from 513 in January to 794 earlier today. This is becoming overbought in the window of opportunity. The opportunity now is to take money off the table.

Lumber became exceptionally oversold in April and the best that can be said about the chart is that it is trying to find stability. Tree stocks such as WY are in a similar pattern. We would avoid the sector.

In January we looked to the possibility of a “rotation” whereby depressed commodities could rally. This has essentially been accomplished and there is little point in staying in the trade.

For a sustainable rally in the sector, gold stocks would have to outperform the bullion price. The ratio has rallied from .152 in December to .181 yesterday. This has been good but the problem now is that it reached the 200-Day, which has been declining and offering resistance on every rally attempt.

The other constructive essential would be silver outperforming gold. The silver/gold ratio set a low at .129 in November and made it to .143 in March. The declining 200-Day ma ended that rally and the chart looks weak.

Our advice in November was to accumulate some gold stocks into weakness. We did not get fully invested. Our concerns have been that another liquidity crisis could be discovered after mid-year and it would not be good for most precious metal stocks.

The next crisis seems to have started and we would take money out of gold stocks.

Today’s weakness in gold and silver in the face of a steady dollar is interesting. At the open, silver was very weak relative to gold.

Let’s look at the gold/silver ratio. The key low was 69.4 on March 23rd and the bounce was to 76.4 last Thursday. The drop was to 72 on Tuesday and it popped to 73 yesterday and this is starting to tell a story.

When the ratio goes up it signals a pending credit contraction and in looking at the action this week, rising through 77 would set the uptrend. This would indicate a developing credit crisis.

The bottoming process in the Precious Metals sector will be prolonged.

In the meantime, gold’s real price has sharply corrected from its high in January. We use our Gold/Commodities Index to keep track. The low was 340 in June and we have considered that that set the beginning of a cyclical bull market. The high was a screamingly overbought at 505 in January and the correction has been to 450 in February and this week. This is oversold on the Daily RSI and support should hold.

Our long-term mojo has been that the cyclical bull market for gold’s real price will eventually pull gold shares up.