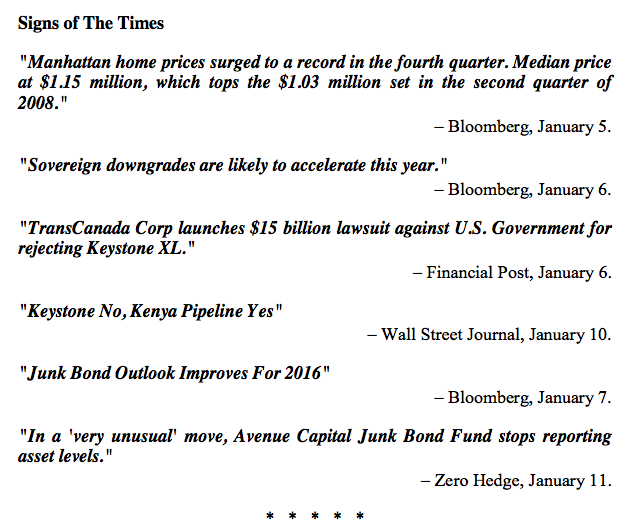 The year 2015 was remarkable. For the first time, a year with the ending in five number did not accomplish a gain. On the nearer-term, the Turn of the Year trade was the weakest in decades. It’s been widely reported that many hedge-fund strategies were not successful.

Beginning at Christmas last year, our research generally worked out. That includes the “Rotation” in commodities out to around May and then resumption of the bear market. Credit spreads were likely to be positive into June and then reverse to adversity.

The big event in equities was the Shanghai Bubble and collapse. While we did not forecast the Bubble, the work on its demise was reliable. In April the thrust was becoming compulsive and we noted that history suggested that it would climax in June.

Headlines that this year’s slump was forced by blunders by the guys running the Shanghai Exchange were inappropriate. Our comments have been that offers overwhelmed bids.

On the rebound out of the Shanghai Crash, the high-side of the ChartWorks target on the DJIA was a 100 points low. On the momentum target, the RSI number was almost met. Both were close enough.

The headline on the latest slump was forced by blunders at the Shanghai Exchange. Our thoughts were that offers overwhelmed bids.

The hit was simple, but the stuff about limit-moves was complication. However, as with the hit in August, it was preceded by spread-widening. This time, spreads broke out on December 21st. The S&P fell through the 50 and 200-Day moving averages on December 29th. The SSEC fell through its 50-Day on December 31st.

The rally attempt by crude failed and in declining it forced spread-widening and another hit to most commodities.

All of which combined to record one of the worst opening weeks in history.1

Quite likely, that the year started badly has had little to do with the calendar, but more to do with seasonal weakness in crude oil and spread-widening. The latter can constrain stock market rallies.

As noted last week, the NYA had taken out the low closes back to October. This was enough to call it a bear. This also showed up in the All-World ex-US Index (VEU). The S&P has taken out the Shanghai-hit lows, but not back to the 2014 lows.

However, the Transports have been leading since April and the way has been down. TRAN took out the lows back to 2014 in early December. The European STOXX took out the August-September lows but not the ones in 2014.

As of today, BKX and XBD have taken out the lows back to 2014. Using the S&P, the US market is not oversold, and still precarious.

With some swings, the Dollar Index is slowly rising with the 50-Day ma. Momentum is neutral and above the 100 level suggests a move to 109.

The Canadian dollar’s decline has steepened and at 69 is back to the levels of 2002. At 23 on the Weekly RSI it is getting oversold.

The reversal to widening spreads triggered the setback in 2007. The second “breakout” in spreads marked the start of the severe contraction in 2008. We were watching for this in late July and it pushed off the infamous Shanghai liquidity crisis.

This time around, the second “breakout” (using the CCC spread) was accomplished on December 21st at 16.74 percentage points. It is now at 17.24, which is moving right along. The “breakout” in late July was at 10.57.

(The problem in Shanghai was more widening credit spreads than bureaucratic blunders at the exchange. Arbitrarily set limit moves did not prompt the selling.)

This is our target. Once spreads set a new trend it becomes cyclically relentless.

The long bond (TLT) has rallied with each setback in the stock market and is doing it now. The rally from 119.67 in late December has made it to resistance at the 125 level. It is uncertain how far this can go.

Since June 2014 the advice has been to avoid lower-grade stuff and to position 3 to 4-year high-grade US corporates. The contribution from the US dollar has been outstanding.