Posted by Bloomberg via David Moadel 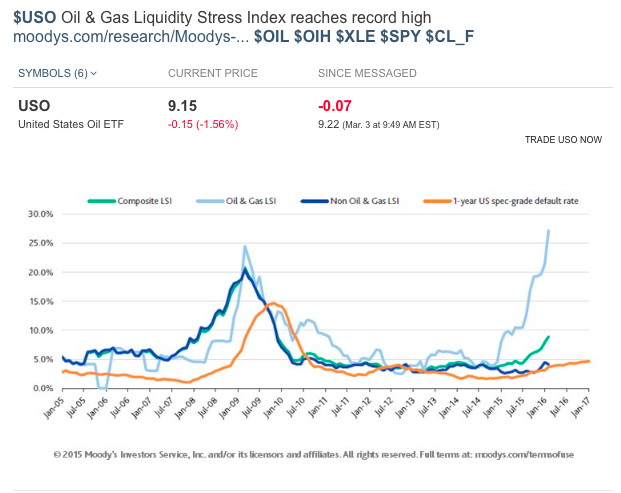 New York, March 02, 2016 — Moody’s Oil & Gas Liquidity Stress Index surged to a record high of 27.2% following the downgrade of the ratings of 19 energy companies in February. The energy LSI has now surpassed its previous high of 24.5% during the last recession, the rating agency says in its most recent edition of SGL Monitor Flash.

February marks the biggest month ever for liquidity downgrades, with the ratings of 17 energy exploration & production companies among the 25 total companies downgraded. Ten E&P companies’ liquidity ratings were cut to SGL-4, Moody’s lowest liquidity rating, along with one energy oilfield services company.

“The prolonged weakness in energy sector credit conditions is driving the sustained increase in the LSI,” said John Puchalla, a Moody’s Senior Vice President. “Energy liquidity downgrades came as part of our ongoing review of oil & gas companies globally in light of the weaker price environment.”

Moody’s composite Liquidity Stress Index jumped to 8.9% in February from 7.9% in mid-January and is now at the highest level since November 2009

“The composite LSI has been increasing since November 2014 and has moved above its long-term average,” said Puchalla. “This progression signals that the default rate will continue to rise as the year progresses.”

Moody’s forecasts that the US spec-grade default rate will rise to 4.7% in January 2017 from a current 3.1%. Nevertheless, most liquidity strains continue to relate to commodity price weakness and the resulting derivative effects.