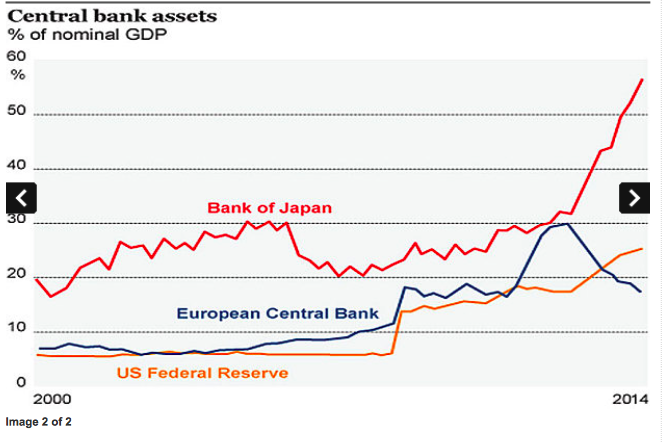 While it is remarkable that the same media organization that a week ago was fawning over the rotting carcass of Keynes’ disastrous economic legacy, can today issue a warning that “Japan Creates World’s Biggest Bond Bubble”, we have long since given up being surprised by things that make absolutely zero sense in the New Abnormal.

So here is William Pesek with a less than Keynesian view on why Banzainomics’ very own Kuroda-san will be regarded as either a genius or a madman in a decade. Spoiler alert: it won’t be “genius.”

Ed Note: Below is a quick summary of what is happening in Japan – Money Talks Ed

The Bank of Japan has stunned the world with fresh blitz of stimulus, pushing quantitative easing to unprecedented levels in a bid to drive down the yen and avert a relapse into deflation.

The move set off a euphoric rally on global equity markets but the economic consequences may be less benign. Critics say it threatens a trade shock across Asia in what amounts to currency warfare, risking serious tensions with China and Korea, and tightening the deflationary noose on Europe. Critics say Japan’s move threatens a trade shock across Asia in what amounts to currency warfare, risking serious tensions with China and Korea