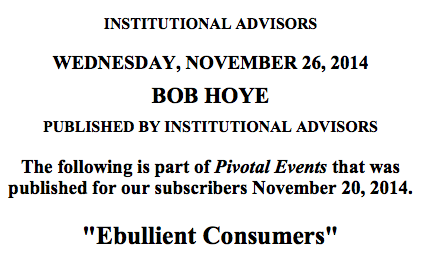 On the other side, commodity or producer prices remain weak. Over time this will feed pricing pressures into commerce and industry. This impairs cash flow and makes it difficult to service debt.

More specifically, Deutsche Bank calculates that if crude drops to $60 some 30 percent of B and CCC bonds would default.

Charts showing the decline in Iron Ore Prices and South African Coal Prices follow. Since the summer both have taken out key lows, extending the downtrend that started in 2011.

Last week we reviewed that the business cycle turns with commodity prices, which has been the case for a couple of thousand years anyway. Included were charts of crude oil and producer prices.

For too many decades the policymakers and too many Wall Street pundits really believed that rising oil prices were a tax on the system and too high would force a recession. Then of course, low gasoline prices, such as now, will prompt a recovery.

There is scholarly evidence that the 3 to 5-year business cycle prevailed as far back as the 1500s. Crude oil was not a commercial product then.

In any century falling commodity prices signaled a contraction.

Gasoline prices fell from the peak of 3.29 in June 2008 to 0.96 (no typo) in that December. The plunge did not prevent the contraction but was part of it.

It is worth repeating that the consumer is the most ebullient and carefree since 2007.

Stock markets are enjoying ebullience as well, which has pushed the AAII Sentiment up to 57.9 Percent Bulls. The following chart shows that it can get higher in the early stages of a bull market. It also shows that at a potential peak this is the highest reading since 2000.

For the senior indexes the decline was a “correction” and for such as the Small Caps (RUT) and the STOXX it was a hit. As with October 2013, the S&P recorded a Springboard Buy. Last year’s target was a rally to around February. This year’s correction was greater and the rebound has been outstanding. Perhaps even impetuous. The S&P has been above its 5-Day ma for 20 trading days without a break. This has happened only three times in the past twenty years.

Of interest is that the “big” market, the NYSE comp (NYA) has not made it to new highs. It is working on a big test.

Last year’s “Rotation” theme worked well and seasonal forces seem to be setting up another opportunity. We have been looking for a low for copper in November. So far the low has been 2.96 earlier in the month with some stability last week at 2.98. However, rally attempts since September have been turned back by the 50-Day ma. So it has to get through that.

Base metal miners (SPTMN) declined from 954 reached on the last “Rotation” to 654 on Monday. The latest decline was sharp, driving the Weekly RSI down to 25. This seems oversold enough to pop a brief rally.

The Oil Patch (XLE) set a magnificent high at 101 in June and slumped to 77 in the middle of October. The Weekly RSI got down to 30, which was big change from the overbought at RSI 83. The rebound made it to 89 a couple of weeks ago. This was turned back by the 50-Day ma and the index has slumped to 84.

Bank stocks (BKX) could become interesting. The action is describing a big rounded top with highs at 73.90 in March and at 74.49 in early September. Since late 2012 the “dips” found support at the 50-Week ma. That ended in October when the slide from 74.49 to 65 took out the 50-Day. The 12 percent hit was tied to a sharp turn in the yield curve to steepening and credit spreads to widening.

The curve bounced and is testing the highs with quite a swing in momentum. Another run at steepening seems likely. As reviewed below, spreads have continued to widen. The alert on the banks would be the BKX taking out the 50-Day. This is at 71.25 and the index is at 72.50.

Since the beginning of the month, the spread from BBB to treasuries has widened from 167 bps to 179 bps. This is becoming impressive.

Our overall theme has been some distinctive action from Exuberance (back again) to Divergence (late summer) to Volatility (September, October and into this month). The remaining phase “Resolution” has yet to complete.

We keep looking back to the extraordinary spike up in the bond future. The instruction was that at the opening on October 14th there was no liquidity and the price shot up 5 points in an instant.

Weird, but perhaps an indication of what might happen when the world loses confidence in the arbitrary aspirations of central bankers. The October event was up, which implies there could be a down event.

JNK has been following the 50-Day average down, but this week the decline steepened. Taking out the 39 level would be an important step on the way to credit dislocation.

This shows clearly in the following chart on spreads (mentioned above). This week we have added the chart of spreads on the key reversal in 2007.

Other country yields are no longer declining and are building a bottom.

Agriculturals (GKX) became very oversold at the end of September. Enough to suggest a sector that could rally. The low was 290 and with some stair-steps the index made it to 327 last week. Corrections have found support at the 50-Day which is at 308 and gently turning up.

Base metals and energy items were covered above, but merit additional comment.

Copper seems to be working on a double bottom. One low was at 2.96 in the turmoil of mid-October with the other at 2.97 on November 4th. Getting above the 50-Day would be constructive.

Crude oil’s plunge has driven the Weekly RSI down to 18.5, which is very oversold. A brief rally is possible. But we remain concerned about a “political failure” similar to the one from late 1985 to early 1986. That failure bankrupted the Soviet Union and this time around it would be very constructive to bankrupt the Neo-Soviet Union as well as terrorist movements in the Middle East.

Will this sector become “precious” again?

Under the old paradigm of what happens in a post-bubble contraction – Yes!

Gold’s real price, as tracked by our Gold/Commodities Index, completed a cyclical bear in June and has set a cyclical bull market. Threats to the stocks would be diminishing liquidity in the big stock market and the even bigger credit markets. Going back a few years, the other threat was that in bull markets for orthodox investments, precious metals under-perform or head down.

Our November 6th Pivot noted that the bottom in the sector would be determined by gold shares starting to outperform the bullion price.

Quite likely this took out the last of the “inflationists” playing the “hate-the-Fed” game that started very quietly in the mid-1960s. It became exceedingly popular in 2011.

HUI/Gold rallied to .141 and tested the low at .130 last week. The rise since has been very constructive and getting though the 50-Day at .152 would set the uptrend.

We think that crude oil is a reasonable proxy for the cost of energy when mining. Gold/Crude set its bottom at 11.71 in June and with a couple of corrections has made it to 16.20.

It seems that what was needed to determine the cyclical bottom for the precious metals has been accomplished. Gold shares could become outstanding performers and one should buy the dips. The main setbacks to golds will be liquidity concerns in the orthodox markets.

*****
Roy Spencer has an interesting blog on the snow storm that hit Buffalo, N.Y.: