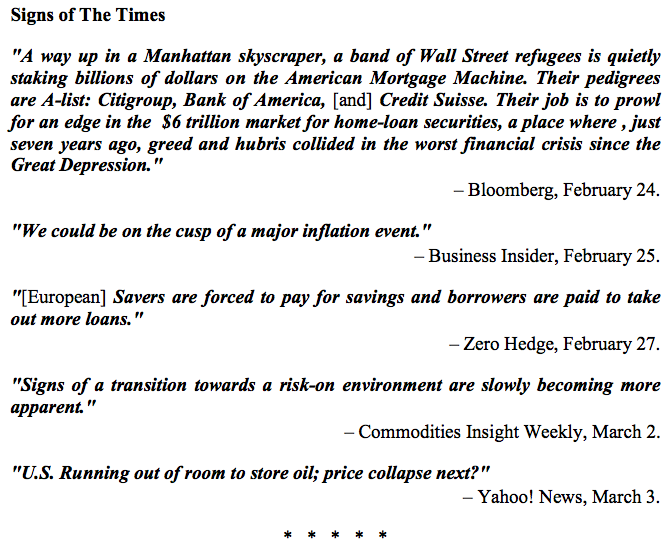 Policymakers are still in the thrall of theories that have always been impractical. Credit expansion and currency depreciation remain the remedies for anything. Sheer audacity has carried them this far, but at some point, their fanaticism will fail. The curiosity is when do they realize their methods are unsupportable.

There are at least four items that will be alerts.

Of these, the latter is underway.

This as well as the general heaviness out there reminds of the “Debt Bomb”. This was a satirical video written and performed by our London buddy – Dominic Frisby. The link to YouTube is: https://www.youtube.com/watch?v=GXcLVDhS8fM

The full realization interventionist policymaking has been a fantasy of generations of undisciplined intellectuals. It will take some time and not-impossible forces to wake them up. Reducing their monopoly on “Monopoly Money” will take a little longer.

The irony is that history provides reliable instruction on what works and what doesn’t. Since the inception of modern central banking in 1694, there are 300 years of specific instruction, and that is that throwing credit at a credit contraction won’t make it go away.

With new stock issues soaring and exploding like rockets, we have been plodding along the path of a Rounding Top. During the Third Quarter history recorded Exuberance, Volatility and Divergence. This was repeated to last week’s high in the senior indexes. This has added an Up Thrust to our Rounding Top pattern on the NYSE comp.

The key high on the NYA was 11,108 set in September. After a correction to Springboard Buy in October the next high was 11,068 in November. Then there was the intense excitement in February that drove the big index up to 11,142 last Wednesday. This was a pop to a new high and the slump is indicating a Failed Up-Thrust”, which is likely to be followed by a correction. At least equivalent to the one that completed in October.

Somewhat more than a 10 percent correction would turn the Rounding Top pattern into a Rounded Top.

This would be the Resolution to the excesses of a cyclical bull market.

But let’s outline the steps on the way.

Taking out the 50-Day ma which is at 10,852 would be step one. Oddly enough, this is close to the level of the 40-Week ma, which provided magnificent support on all of the bull moves since 2009.

In the meantime, the old Dow Theory has been a guide that has been building a classic “Sell” signal. As the ChartWorks updated it on February 14th, the longer the non-confirmation of the DJIA high – the more significant the correction.

If the correction occurs within six weeks it is moderate. The Dow and the Transports both set highs on December 29 and Monday’s high for the Dow ran unconfirmed for ten (10) weeks.

The other count we had going was the stock rally that follows a collapse in crude oil prices. And this has been looking for a high in the March 6th to 13th window.

In the Sector Opportunities Department, the outstanding rally in the REITS (IYR) registered an Upside Exhaustion in early February. The high was 83.54 and by steps the decline took out the 50-Day a couple of weeks ago. That was at 80 and this week the moving average is providing overhead resistance.

The last time this was crossed was on the October correction when support was found at the 40-Week ma. It is now at 74, which is also support provided by the December correction level.

On the S&P, the Failed Up-Thrust, or False Breakout would be realised in taking out the base line. The index is at 2098 and taking this out would confirm the False Breakout.

Is this week’s decline a correction or the start of the Resolution to the excesses of a cyclical bull market?

Do negative interest rates require the bond holder to restore coupons and then some to the certificate, rather than clipping them?

Where the stock market has been working on a False Breakout, credit spreads have had a significant correction in the widening trend. We were looking for a reversal to widening at around June and this was accomplished at 143 bps in June. The “wide” was 213 bps in January. So far the narrowing has made it to 177 bps.

That was a profound False Breakout.

The resumption of widening in the middle of October effectively ended the 2007 stock bull market.

This time around, spreads reversed to widening at 143 bps in June and the worse was 213 bps in January. Narrowing has made it to 177 bps yesterday.

Further widening would make us wonder if this week’s False Breakout is as profound as the one in 2007.

Using the Junk side of recent narrowing, the rally in JNK was impetuous enough to register a Daily Springboard Sell as well as a Weekly Upside Exhaustion. As noted last week, the latter has occurred only 7 times on a series back to 2008. Each was followed by a significant setback.

JNK has been a good guide to the action. Its plunge with crude into December registered a Springboard Buy.

We appreciate technical measures when they register at each end of a strong move.

Spreads are setting up for the next phase of widening. Since the cyclical turn was made in June, it has been on the path to distressed conditions.

We’ve been bullish on long-dated Treasuries since January 2014 and got out twelve months later. Our January 20th Special reviewed the whole bull market from 1981 and concluded that it was close to “Ending Action”. The February 2nd ChartWorks noted the rare Upside Exhaustion as the high was set at 152. The projected target is the 84-Week ma, at around 132.

European bonds have been interesting. Greek and Russian yields have declined a little. Perhaps just a correction on the road to ruin.

British and German yields seem to be trying to base.

The action in UK bonds has made the turn to rising yields. The low was 1.33% at the end of January. This week’s rise to 1.88% has taken out the last high at 1.84% and sets a modest uptrend in interest rates.

In anticipation of the actual start of the ECB buying program, yields have declined today. Will UK bonds trade with Europe or with the US?

Since last summer we have been calling the action in all classes of bonds as being the biggest bubble in history. Being the biggest, its demise will not go unnoticed.

The Dollar Index traded in a range at the 94 to 95 level from January until Tuesday. This was on either side of the 50-Day and in rising to 96.37 today it is breaking out. The last such breakout occurred in July. The resumption of the “sound money” trend may be perplexing to the establishment.

Let’s review our stance. In a post-bubble contraction the senior currency becomes chronically strong. Last June we advised that while the DX was overbought it could become superoverbought. That was reached on the zoom into January.

Has the sideways motion eased the overbought condition?

No, it is still relatively high, but that was the case following the commodity blow-off of 1980. The DX rallied from 95 to 164 (not seasonally adjusted). The rallies generated superoverbought conditions many times and corrections were modest.

The main uptrend can continue.

Crude hit our timing target for the plunge to end in January. Then the bottoming process would last for many months. “V” bottoms have not followed oil crashes. Last week our concern was that this process could dither around into the start of the next recession.

Generally weakening commodities, as well as the crash in the Baltic shipping rate, are telling us that the global economy is slowing. Over the past few months many US business and economic numbers have turned from very positive to soft or down. There was a lengthy list of them, but in not immediately grabbing the story; it is gone.

However, history records that in a “New Financial Era” the stock market no longer leads the business cycle. We used this in 2007 to advise that the recession would start virtually with the bear market. And it did. Then it was used to note that once the panic ended in 2009, the recover would soon follow. The crash ended in March and the recession ended in that June.

A turn to disappointing numbers should accompany a resumption in weakening commodities – and – a weakening stock market.

Crude enjoyed a sharp jump from 43.50 in January to 54 in early February. It has been in a trading range. This week it has worked its way to above the 50-Day ma. So long as it stays above it is constructive.

Longer term, we have our doubts as relative to real measures such as gold or the PPI, there is further to go on crude’s full bear market.

In the meantime, gasoline became more oversold than it did in its post-2008 crash. And now it has exploded, setting a huge swing on the Daily RSI to very overbought. Also there is a significant gap in the chart. Gasoline needs a correction.

Over in base metals, the GYX set its low with the crude problems at 299 and bounced to 318 in early February. The next low was 305 a couple of weeks ago. The last rally attempt was turned back by the 50-Day ma. At 310 now, base metals remain in a trading range.

Base metal miners (SPTMN) declined from 1599 in 2011 to 513 in January. The rebound made it to 739 last week. At the recent low it was not cyclically oversold. Miners are drifting down to test support at the 50-Day. We are not bullish on the longer term.

Lumber fell out of its wedge pattern and took the hot forestry stocks with it. WY set an Upside Exhaustion at 36.73 in early January. The initial slide was to 34.46 and the rebound made it to the 50-Day at 35.50. It is now at 34.16 and not oversold. Tree stocks are on an intermediate decline.