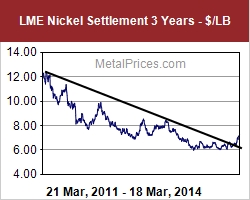 Russia has essentially annexed Crimea and is amassing troops at the border of Ukraine. The relationship between the United States and Russia has regressed back to the Cuban Crisis days. While we may not be on the verge of trading nukes, it does seem we are headed for a new Cold War.

Every time Obama draws lines in the sand, Putin steps across them, whistling. Last week, Obama struck back in a surprise move by releasing five million barrels of crude oil from the Strategic Petroleum Reserve. This drove down the cost of West Texas Crude (WTI) from $105 to $98 a barrel.

Russia gets half of its revenue from exporting oil and gas. Obviously the cheaper oil is, the less money Russia makes from its sales. The SPR release was a message to Putin that the financial side of this coming war has begun. Commodity markets will be used as a weapon against the Putin regime starting… now.

But two can play it this way, and Putin has already stated that there will be reprisals for any type of sanctions.

Norilsk Nickel (OTC: NILSY), a Siberian company, is the largest nickel producer in the world, which makes Russia the largest producer of nickel in the world. The metal is primarily used to make stainless steel.

The Big Bear of Nickel

If Putin were to cut nickel exports to Europe and the U.S., nickel prices would jump. Prices have already gone up from $6.50/lb to $7.40/lb over the last 30 days. As you can tell by this chart, nickel has been a loser for more than three years now. But the down trend has been broken. The price has bottomed out with almost no volume. And as we know from the great rebound of 2009, when the nickel price starts to move, it can come roaring back.

Even without the new cold war threat, nickel production is forecast to trail consumption in 2015 as the supply shrinks for the first time in years. You see, after the boom in commodities in the mid-2000s, China switched to using nickel pig iron (NPI) and invested in low-cost rotary kiln electric furnaces. This destroyed pricing power for the nickel producers and sent the price below cost. This, in turn, drove many producers out of business.

Furthermore, in a cross association with our other investment theories, nickel is used heavily in the liquid natural gas industry. The Japanese use 7% nickel steel as the new standard for cryogenic LNG storage tanks, since this maximizes fracture toughness in a low-temperature environment.

This offers a new source of demand for nickel, especially since there is a good chance the U.S. will start exporting LNG to Europe as it moves away from Russian natural gas.

One way to trade nickel is to buy the iPath DJ-UBS Nickel TR Sub-Idx ETN (NYSE: JJN) like I recommended to my most valued readers of Crisis & Opportunity. We are up marginally since our buy last Friday.

It should be noted that nickel is the only industrial metal up today, a day when copper is looking like the proverbial falling knife.

Keep Your Stick on the Ice,

Since 1995, Christian DeHaemer has specialized in frontier market opportunities. He has traveled extensively and invested in places as varied as Cuba, Mongolia, and Kenya. Chris believes the best way to make money is to get there first with the most. Christian is the founder of Crisis & Opportunityand Managing Director of Wealth Daily. He is also a contributor for Energy & Capital. For more on Christian, see his editor’s page.