#3 Most Viewed Article: Putin, gold and silver: What you need to know right now … 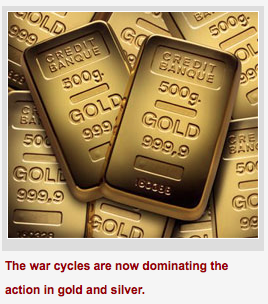 In a moment, I’m going to tell you about the recent action in gold and silver, what it means, and some surprising conclusions.

But first, you need to know more about the cycles of war that I’ve been telling you about, how they are ramping up so quickly, and more specifically, about Putin.

First, let’s take a look at the war cycles. In early 2013, over a year ago, I warned everyone that the war cycles were set to explode higher, on the backbone of bankrupt Western economies.

It’s a fait accompli. War and bankrupt economies go hand in hand. When desperate, like the governments of the United States and Europe are now, strange things start to happen.

You only need look at the historical record. The collapse of Rome was accompanied by many different civil rebellions and international conflicts.

Ditto for the Ottoman Empire. The British Empire, when it fell on desperate times. For Spain. For Germany. For every major economic power throughout history, when governments became bankrupt and desperate for cash, they imploded by attacking others and their very own citizens, through sleight-of-hand tax increases, through confiscatory policies that first racked everyone’s money, then confiscated it, through loss of civil liberties, through propaganda and more, lots more.

Weakened, they lash out. They prepare to rally the people, they look for distractions, reasons to spend even more money, all with the aim of consolidating the national psyche.

This is what the United States is doing now. Russia is doing the same thing. Putin is rallying the national psyche. The Russian economy, weakened internally by corruption, by alcoholism, by declining revenues from the three-year bear market in commodities, is not in much better shape than Europe or the United States.

And it is now entering a new, more dangerous phase. Military conflict is almost always preceded by economic warfare. And Putin is about to pull the trigger and respond to sanctions against Russia with his own sanctions against the West.

[Editor’s note: As the Iraq and Afghanistan wars wind down, a series of new civil and regional wars are about to EXPLODE overseas. Find out in Larry’s FREE report, Rumors of War, the key sectors that will see MASSIVE profits as foreign investors flee overseas markets in panic.]

Billions of dollars in foreign investment in some of the world’s biggest untapped oil reserves are at risk. Exxon Mobil Corp. (XOM), for instance, has drilling rights to 11.4 million net acres (46,134 square kilometers) in Russia, the company’s biggest single cache of drilling rights outside the United States.

Other major companies with big investments in Russia include Royal Dutch Shell Plc (RDS-A), PepsiCo Inc. (PEP) and Alcoa (AA). Then there are a slew of medium- and large-sized companies from the West that are also at risk of getting hit by Putin.

U.K companies are most worried about their financial services in Russia. France is worried about military sales and luxury goods. Germany has the biggest trade with Russia. And Switzerland and Germany also have the biggest banking and loan exposure to Russia.

At the same time …

Russia is hemorrhaging from capital outflows, a record $60 billion in Q1 alone.

Savvy Russian investors want out. They’re not about to sit around and see their capital get caught up in an economic war, probably followed by military conflict.

So they’re moving their money. Europeans are moving money out of Europe as well. Which leads me to my next point …

During not-so-normal times like we have today, the flow of capital is what determines major market moves.

Not even price-to-earnings ratios, or corporate balance sheets or anything most analysts use to predict market movements.

It’s capital flows, from one nation to another, from one stock market to another, from one savvy investor’s pockets to any investment that can help that investor get their money to safety, off the grid to a market that is liquid, that offers a decent chance at some type of return, and where preservation of capital is also of utmost importance.

$60 billion coming out of Russia in Q1 may not seem like a lot, but when I look at the war cycles and how they ramp up for six more years …

And I consider the miserable shape that Europe is in …

First, we will soon see gold and silver take off like a bat out of hell.

Second, we will soon see the U.S. equity markets soar to one new record high after another (after a correction is complete).

Third, we will soon see the next wave down in the prices of sovereign bonds in Europe and the Unites States …

And the next wave higher in interest rates …

With all of this likely to happen in the face of a rising dollar, falling foreign currencies …

While the majority of analysts and investors are caught flat-footed, on the wrong side of the markets.

Right now, gold and silver are still on the cusp of a major new bull market, one that could end up even more powerful than even I originally expected.

Chief reason: This past week’s market action. Silver made a new low, taking out its December low, while gold remains nearly $100 above its equivalent December low.

This is what is called a “bearish non-confirmation” — a technical term that describes a situation when two related markets behave differently at an important low, where one market makes a new low and the other doesn’t.

And typically, it is extremely bullish.

Only time will tell, but right now, the patterns I see emerging in gold and silver tell me that …

But one that will merely compress the springs all that much tighter and lead to an explosive rally immediately thereafter.

So just like the battlefield has been prepped between Russia and the West, the war cycles are now dominating the action in gold and silver …

And they will soon create an explosive rally in the precious metals, the likes of which we have not seen in a very, very long time.

It’s now not so much a matter of time, but of price level. Will gold take off from here, or slightly lower levels?

Either way, we are now merely a few yards away from the time when I will scream from the rooftops “Backup the truck now in gold and silver!”

If there is one thing you do the rest of this year to help insure you protect and grow your money, it is this:

If you do not, you may miss the most explosive turnaround to the upside — ever — in gold and silver.