Puru Saxena Says: Everything Is Backwards! 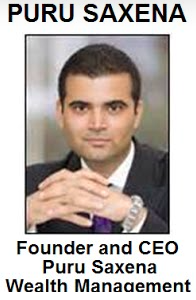 Puru Saxena Says: ” Markets Are So Distorted And So Twisted That Reliable Indicators Are No Longer Working. Everything is Backwards”

As part of the ongoing series of Austrian School of Economics, FRA Co-Founder Gordon T. Long sits with Puru Saxena, of Puru Saxena Wealth Management. Mr. Saxena is the portfolio manager of his firm and he oversees discretionary investment mandates. He is also responsible for heading the firm’s research process and formulating investment strategy.

Mr. Saxena has extensive investment experience and he is a registered investment advisor/money manager with the Securities & Futures Commission of Hong Kong. Highly respected in the investment management business, he is a regular guest on various media such as CNN, BBC, CNBC, Bloomberg, Reuters and a host of other channels. Furthermore, he is regularly featured in several publications such as Barron’s, Hong Kong Economic Times, South China Morning Post, Benchmark magazine, Hong Kong Business and China Daily.

Mr. Saxena is also the editor of a monthly economic report – Money Matters. A highly acclaimed publication is read by professional and retail investors in numerous countries. He first began publishing his monthly economic report in June 2000 and it has now attracted a wide following. Prior to establishing Puru Saxena Wealth Management in 2005, he was a Founding Director and President of financial services firm – Bridgewater (now Tyche Group), where he oversaw the firm’s investment strategy.

“Financial markets are so distorted and so twisted that reliable indicators are no longer working. Everything is backwards”.

People are so conditioned now of believing the stimulus jargon that every time a central bank utters the word stimulus, everybody starts buying stocks again. If you look at japan, they have tried this for nearly 25 years now, and we have had recession after recession. There are zero percent short term interest rates, and not much economic growth in Japan. I don’t think this monetary experiment is going to end very well.

“I would be very weary by promises from the government and central banks at this point because they have a vested interest.”

I think they will try and inflate this in a typical Keynesian manner. We have negative interest rates already throughout Europe, so it won’t surprise me if you have it in the US.

“The problem isn’t a liquidity problem, it is a debt problem.”

The world has never been so indebted; the debt to GDP ratio is now over 280% globally. When you have this much accumulated debt, history has shown that economic growth slows down. Economic growth, by definition, comes from the private sector taking on more debt. When people borrow, they bring forth tomorrows consumption, today, and they consume without ever buying any assets.

“Whatever they’re doing, it’s not working.”

Central planners do not realize that if somebody is already in debt, they are not going to borrow anymore with interest rates at zero. We are currently in a deflationary environment. Central planners are trying to fight this by implementing quantitative easing, and all sorts of bizarre experiments. But at the end of the day the monetary velocity is at a decade low.

“Asset prices are going to deflate quite sharply and when this happens, there will be chaos.”

“Major mistake people have is that QE works, or stimulus works.”

First one is that QE causes hyperinflation and therefore everybody drove up the prices of commodities to multi year highs. Investors still believe QE causes economic growth, I do not believe this. People think stimulus will cause economic recoveries and economic growth. When people realize stimulus actually leads to anti-growth you will see a big sell off in equities.

The one thing I’ve learned from being in this field from 16 years is that markets go up and markets go down. There is no one way street. “I think investors should keep a large chunk of their money in cash right now and long term treasuries are also a good idea.”

But if you’re look at a long term horizon, (i.e. 5 years+) I think investors should start looking at the beaten down commodity areas. Commodities have been decimated over the last 4 tears. If it was me I would not buy any equities right now. We personally don’t own any stocks on the long side for our clients at the present. The downside risks for many stocks is greater than their upside potential.