Pundits Claim Europe, Japan Looking Better. What Are They Smoking? 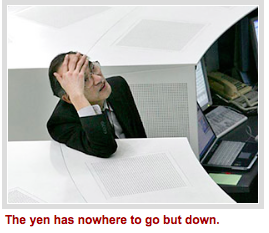 Some analysts seem to think there’s an inflation scare in the air. That Europe’s economy is looking a tad better and so is Japan’s.

Therefore, they claim, the dollar is going to continue to fall while the euro and yen rally, hence, setting off inflation in the U.S. as a result of a falling dollar.

But the fact of the matter is that nothing could be further from the truth! Let’s take a closer look at their argument to see how ridiculous it is. It’s also a good lesson on how pointless it is to use fundamentals to make forecasts.

I ask you, where is the improvement in Europe’s economy?

Fact: Stock market losses in the euro region have left the Stoxx Europe 600 Index down 9.9% this year, its worst start since 2008.

Fact: Dismal bank earnings have pushed the cost of insuring the financial credit risk of European banks and insurers to the highest levels in more than two years.

Fact: Europe is stuck in a nightmarish depression of no economic growth in the strongest European economies and sinking growth in the weakest.

Fact: Prices are falling throughout the euro region. Unemployment is hovering at record highs. Debt-to-GDP levels are going virtually straight up.

Then there’s the Syrian refugee crisis that is wreaking havoc on government budgets everywhere in Europe and causing even further unrest among citizens who are already having a tough economic time.

Furthermore, Europe’s leaders are still committed to even more austerity, sacrificing the jobs and livelihoods of tens of millions of people!

Anyone with a clue of what’s going on in Europe would recognize that Europe is still headed down the tubes, and with it the euro. Its recent rally being nothing more than a bounce, with a still huge letdown coming, and soon. Fact: For the third quarter of 2015, Japan’s economy shrank by 0.4% versus expectations of a quarterly contraction of 0.3%.

Japan’s economy is picking up? Based on what? I don’t see it. Wrongly, pundits are taking the recent strength in Japan’s currency as a sign investors are willing to own the Japanese economy and hence even Japanese stocks.

But that’s a recipe for financial disaster. Savvy money will soon realize that the yen has nowhere to go but down as the Bank of Japan puts the pedal to the metal with more yen printing.

Contrast Europe and Japan with the United States …

A. The U.S. economy, growing modestly as it is, is still the strongest of the developed nations, much stronger than Europe’s or Japan’s economy.

B. The U.S. economy has the deepest, most liquid capital markets on the planet, making them the easiest place to invest and with the most opportunities.

C. U.S. markets remain the last bastion of capitalism in the world, and certainly in the Western world.

Bottom line: Arguments that Europe and Japan are recovering are complete nonsense and based on fundamentals that are full of holes. Anyone with half a brain can see through such arguments.

FIRST, the euro’s bounce is near ending, and a renewed downtrend is about to take root.

SECOND, conversely, the dollar’s recent pullback is near ending, and a new leg up is about to begin.

THIRD, inflation is nowhere to be seen in Europe, Asia, Latin America, or even in the U.S.

So then, you ask, why the huge rally in gold? I warned you it was coming. I have also warned you all along that gold’s next rally would coincide more with the breakdown and collapse of Western economies than anything else, especially inflation.

And so it is. Gold is rallying with no inflation in sight. And instead, with collapsing economies all around it.

Gold has now taken out a weekly buy signal at $1,187.50 — the first step in confirming a new bull market in precious metals.

P.S. As the Dow doubles, some stocks will see explosive gains of 300%, 400%, 500% and more. To help you get ready to take full advantage of the bull market of a lifetime, I want to send you a complete Dow 31,000 Preparedness Kit — five distinct free reports! The first free report spells out step-by-step what you must do now to position yourself for amazing profits (and protection) over the next two years. Click here to download now!