Preparing for THE Bottom: Part 1 – Gold 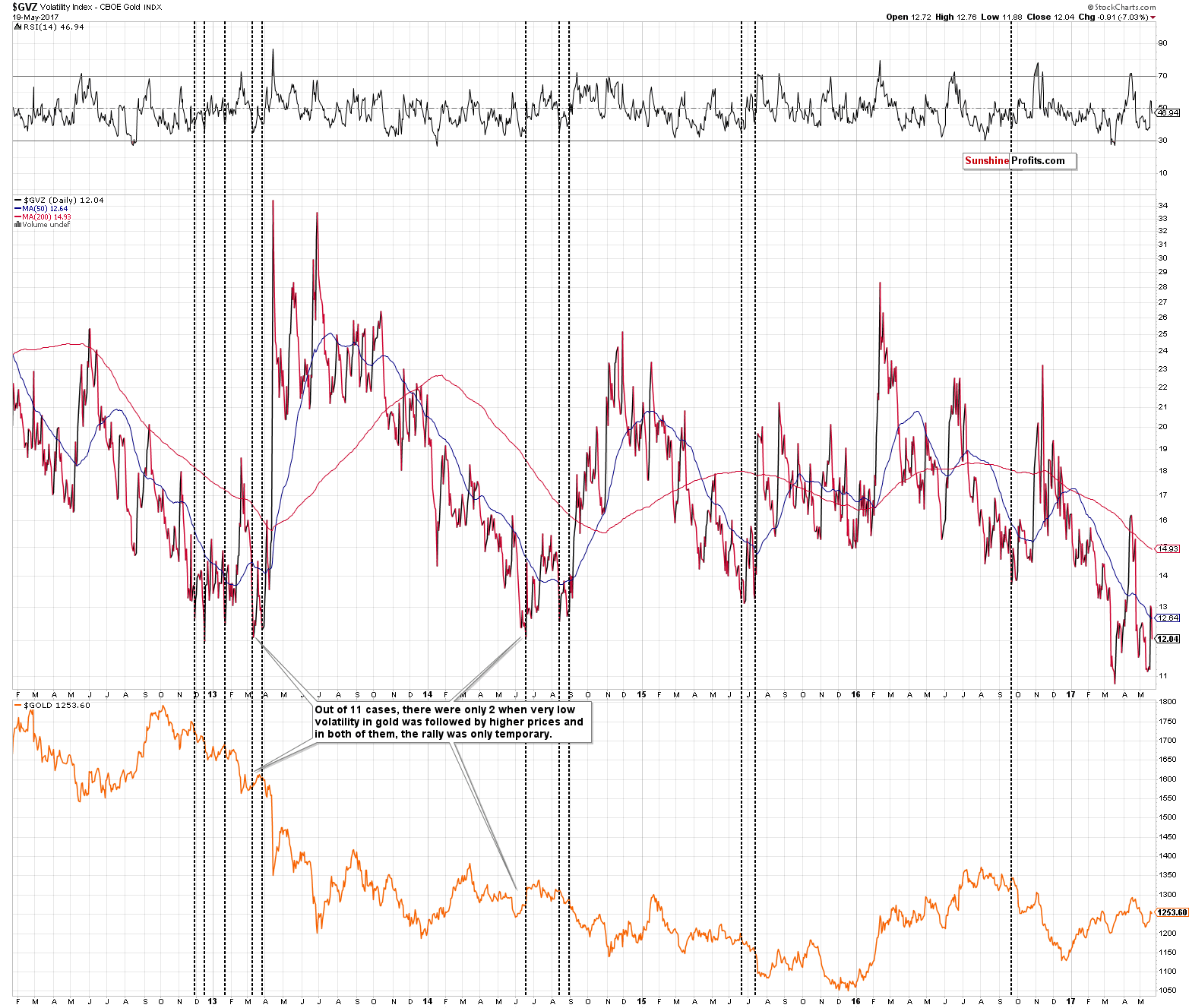 Since the bull market in gold started over 15 years ago, we haven’t seen such a long consolidation pattern – ever. Even the big 2008 plunge was followed by a rally almost immediately (from the long-term point of view, that is). The gold volatility index confirms the above having recently moved to new all-time lows (it’s been published for only several years, but still, that’s an important observation). Please take a look below for details (chart courtesy of http://stockcharts.com). Now, what does the above (lack of) volatility mean? That the gold market is less and less appealing to traders and investors – at least to those, who don’t believe in the gold market’s strong long-term fundamentals. It’s less exciting and some might even describe it as boring.

But, is this really the time when one should take it easy, stop checking what’s going on in the gold market and wait for gold’s rally? If one wants to miss the event that will likely be called the mother of all buying opportunities, then this is the way to go. Something tells us that you don’t really want to miss something like that.

The biggest mistake that people make in a street fight is that they don’t realize that they are in a fight. Paraphrasing the above and applying it to investments: the biggest mistake that investors make is that they don’t realize that the best time to buy is when nobody wants to and when a given asset is widely hated. It’s ironic that the same reason for which people don’t want to buy a given asset is the same reason that creates the great buying opportunity, but still, this is the case.

By the way, this phrase has its own trading indicator – the Bollinger Bands – when the bands narrow, it suggests that a big move is just around the corner. The space between the bands depends on the volatility. So, low volatility (the calm) suggest a looming big move (the storm).

We don’t want to discuss why the final bottom in the precious metals sector is still ahead of us or to make a specific gold price prediction, as that’s not the point of this article and because that’s something that we discussed many times in our previous articles (however, the fact that gold was not widely hated when it moved below $1,100 in 2015 is one of the things that point to the above conclusion).

Gold’s Not Doing Much – Why Bother?

The purpose of this essay (the first one in the “Preparing for the Bottom” series) is to emphasize the need to stay alert when times are not turbulent, but boring. The calm before the storm is exactly how we can view the current “boring stage” of the long-term bull market in precious metals. This is precisely what happens before extremely profitable buying opportunities and it seems that now is exactly the wrong time to give up on this market. Instead, it’s the time to prepare for the punch that the precious metals market is likely to give all investors in the coming months and make sure that one has a plan to use it profitably instead of being hurt by it. Naturally, it all comes down to preparing NOW, before the volatility kicks in as it will be difficult to keep one’s head cool in that environment without being prepared in advance.

In the following articles, we will discuss the planning process and preparations in greater detail, but for now, the bottom line is this: be sure to stay alert and focused on the precious metals market even though it may not appear all that interesting at this time and prepare for the big moves that are likely to be seen later this year. This time investment should prove extremely worth your while.