Prepare For Bearish News As OPEC Meets Next Week

Posted by James Hyerczyk via Oilprice.com 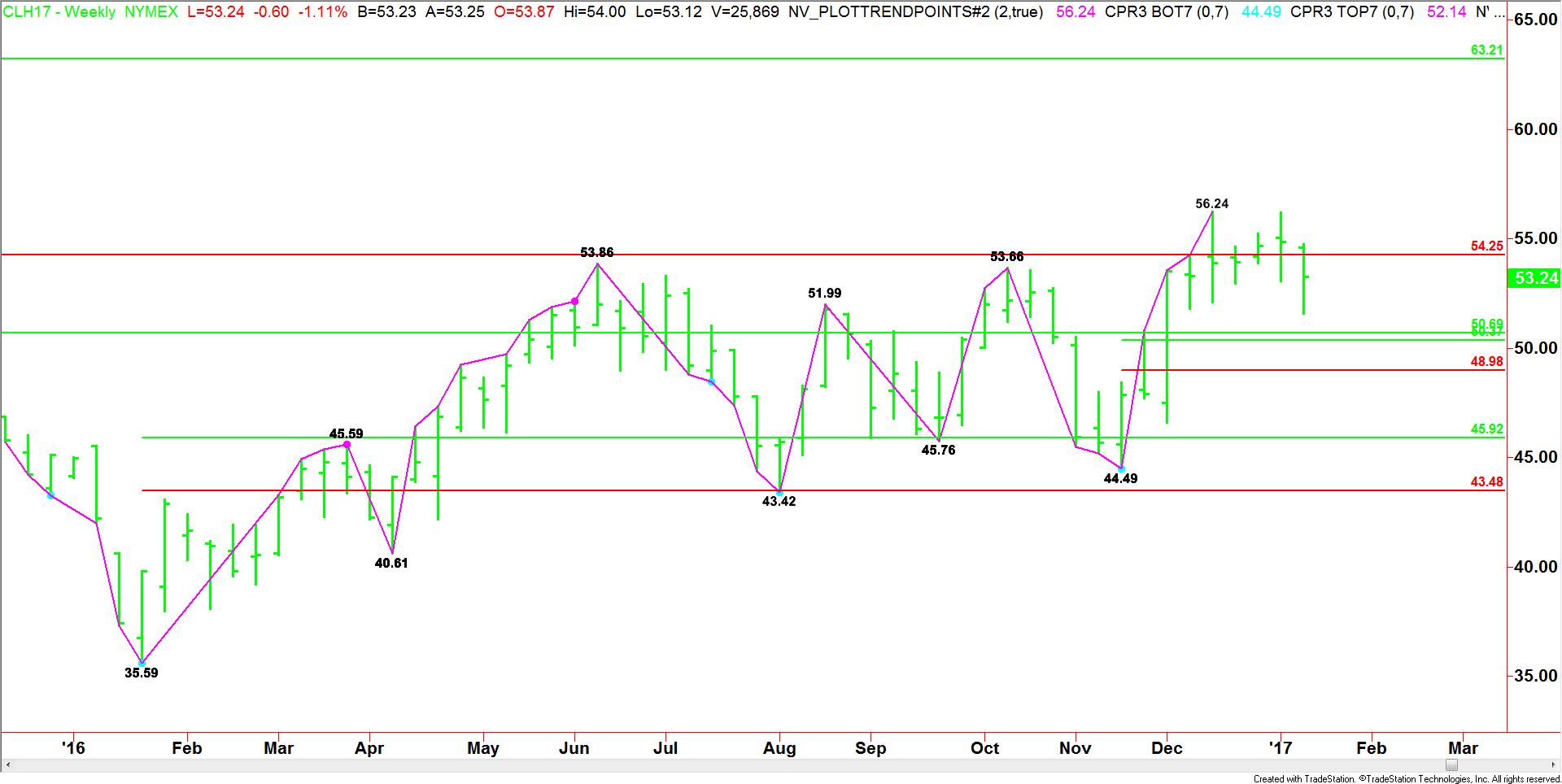 It’s been an up and down week for crude oil futures with the price action playing out as expected. Going into the new year, we were looking for a choppy, two-sided traded largely because of the uncertainty regarding compliance with the OPEC/Non-OPEC plan to cut production, trim supply and return price stability to the market.

On the upside, we expected prices to be capped by rising U.S. production, while on the downside, prices were expected to be supported by reports that countries who had agreed to limit production would announce compliance with the plan. Based the price action this week, we can conclude that we’ve seen a little of both.

The main trend is up according to the weekly swing chart. However, momentum has been sideways for the last four weeks. A trade through $56.24 will signal a resumption of the uptrend. A trade through $44.49 will change the trend to down.

Given the average weekly range, it’s pretty safe to say the uptrend is safe next week.

Based on the price action since December 16, the direction of March Crude Oil next week will be determined by trader reaction to the Fib level at $54.25. A sustained move under $54.25 will indicate that momentum is shifting to down. This could trigger a break into a 50% support cluster at $50.69 to $50.37. Since the main trend is up, we could see enough buyers come in on a test of this level to trigger a technical bounce.

The short-term Fib at $48.98 is very important to the structure of the chart pattern. If it fails then look out to the downside because the next major support doesn’t come in until $45.92 to $43.48.

Overcoming $54.25 will indicate the presence of buyers. This could generate enough upside momentum to challenge the high at $56.24. This price is the trigger point for the start of a strong rally with the next likely target $63.21 over the near-term.

I think we’ve seen enough price action and order flow over the past month to conclude that trader reaction to $54.25 will tell us if the bulls are maintaining control or if the sellers are taking control.

Despite the uptrend on the weekly chart, the eye test tells us that March WTI Crude Oil is rangebound. On the support side, it is being held up by expectations that the OPEC/non-OPEC deal to curb production will attract 100% compliance. The OPEC spin machine is also peppering the news with positive stories.

The market, however, is being capped and perhaps taken over by worries about increased U.S. production. In my opinion, all it is going to take is only one negative story about non-compliance with the plan to trim production to trigger a steep sell-off.

This is likely to come from the meeting to be held in Vienna on January 21 to 22. Look for the market to chop around next week, but start preparing for bearish news if the meeting reveals less than 100% compliance and evidence of cheating.