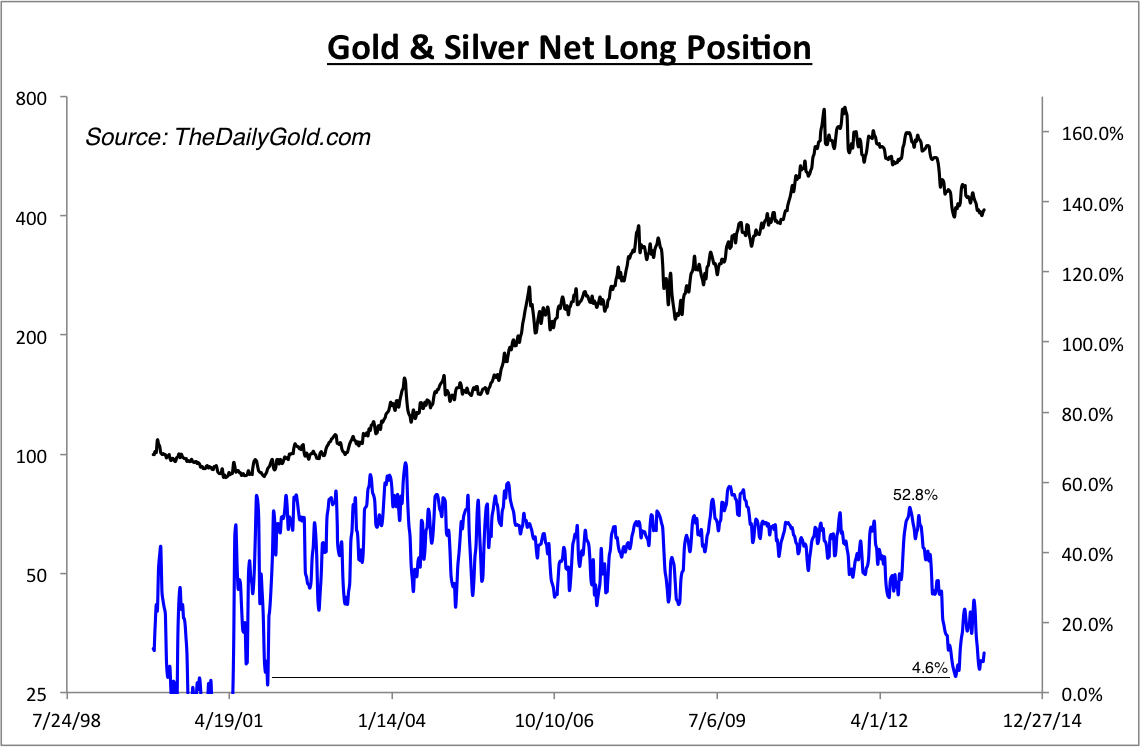 We’ve recently written quite a bit about the current technical situation in precious metals as well as the current bear market compared to past bear markets. Thus we’ve neglected sentiment somewhat. This is a good time to examine sentiment as the sector appears to be bottoming or trying to emerge from a bottom. This chart from Tiho Brkan, shows the Central Fund of Canada and its premium or discount to NAV. At the June low the discount was 7%. Shortly thereafter, the discount surpassed 8% though CEF did not make a low in price. That was the highest discount to NAV in 12 years! The current discount is 5%.

Assets in the Rydex Precious Metals Fund have evaporated from $370M to $58M. I don’t have the history handy but I believe this is near a ten year low. Even more striking is the decline in assets as a percentage of all sectors. That is down to 4.7% which is well below the 2008-2012 lows.

Sticking with precious metals stocks we see that short interest is very high in GDX. This isn’t necessarily bullish. The shorts have been correct for more than a year. However, short interest surged in November and December and the stocks failed to make new lows in December. If short interest remains high in January and the market continues to firm then its bullish.  (Source: Schaeffers Research). Just like history, sentiment does not pick or ensure a bottom. The best recipe is to wait for a combination of extreme negative sentiment and very strong technical support. We were hoping the precious metals complex would plunge further to that very strong technical support noted in recent editorials. It could still happen. However, we have to listen to the market and its price action. The gold and silver stocks failed to make new lows in December. Last week Gold and Silver tried to make new lows and failed.

If precious metals fail to make new lows when sentiment indicators are at decade extremes then how could they make new lows in the near future? There are some speculative longs in the market (11% of open interest) who could drive it lower temporarily if metals don’t rally soon. As we’ve said, any selloff is likely to be final and would produce a strong rebound. If that doesn’t happen then the market could continue a slow, grinding saucer type of bottom. The longer this drags out then the more likely that is. The age and depth of this bear, extreme negative sentiment, lack of new lows and recent relative strength in the shares lead us to err on the bullish side. If you’d be interested in learning about the companies poised to rocket out of this bottom then we invite you to learn more about our service.