Precious Metals Monitor: Both Gold & Platinum to Break $1900, But One Has More Upside 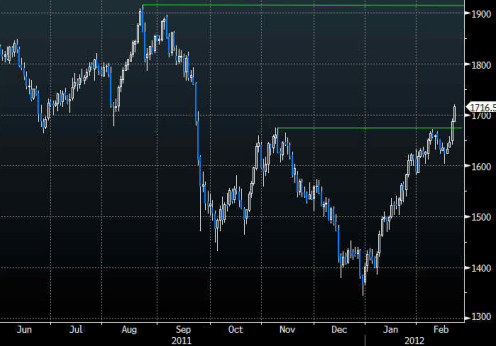 We offer our latest analysis on the precious metals market.

After two weeks of consolidation, precious metals finally awoke from their slumber over the past few days. Gold, silver and palladium spiked to the top of their recent ranges, while platinum broke out to fresh multi-month highs.

A strike at the world’s largest platinum mine, Rustenburg in South Africa, has led to the loss of more than 80,000 troy ounces of the metal over the past month. The mine’s operator, Impala Platinum, said resumption of full production will take weeks, at least.

Analysts warn that the situation could get uglier if labor unrest spreads to other companies.

Prices for platinum have surged in recent sessions, now trading at a five-month high. The metal is quickly closing in on parity with gold prices. After the recent breakout, prices have a clear path toward the multi-year high above $1900, leaving substantial upside from here.

While gold also has been performing well, the gold/platinum ratio has been quickly falling amid platinum’s outperformance. It was last trading near 1.02 after peaking above 1.15 late last year.

Over the past three decades, the ratio has been significantly below 1. Thus, continued platinum outperformance over gold would not be surprising as the ratio declines further. Even so, the outlook for gold is bullish as well. The yellow metal moved up to the top of its recent range this past week and looks poised to move toward the next level of resistance at $1800