Precious Metals are Poised for a Bounce 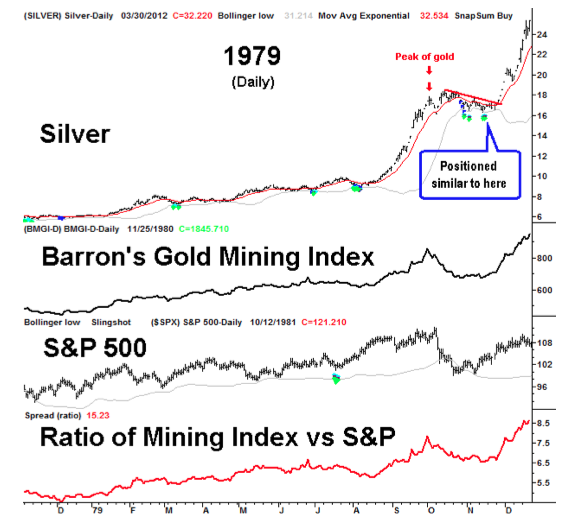 Our ongoing comparison of the 2003-04 and 1976-80 markets in gold related to the action of the current bull market continues to move along with few deviations. The scheduled late-February early-March high, coupled with the HUI testing its upper 50-day Bollinger Band, concluded with the dramatic $100 ‘leap day’ break in gold on February 29th. The next two time windows of significance were to be lows at the end of March ( ̧) and again at the end of May with the best advance following the second low.

The 61.8% retracement ($1625) of gold’s December to February rally continues to be an important support. Holding this level will keep it in the context of November 1979, with a close above $1770 (and 550 in the HUI) confirming the start of the next upward phase to new all-time highs in the bull market. A violation of $1625 would likely lead to new lows for the year as we move into late May.

The silver, mining indices and S&P are also moving similar to 1979 (even without the help of the Hunt brothers). The Barron’s Gold Mining Index peaked in October 1979 in both nominal terms and relative to the S&P (see ratio). This was followed by a period of underperformance and a 23% decline as the metals consolidated. It then increased by 122% (88% relative to the S&P) into February 1980.