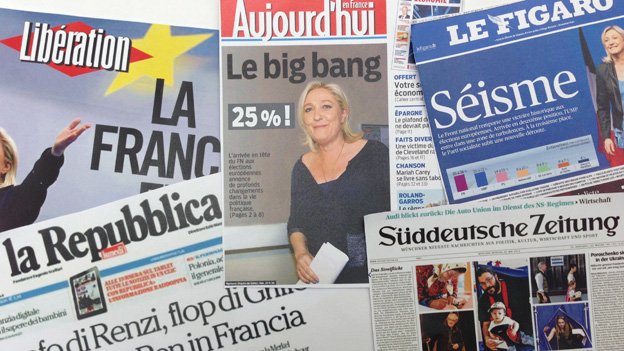 One of the last remaining impediments to total global domination by the banks and their politicians is the quaint tradition of popular elections. Every so often the powers that be are required to see if the 99% want them to remain in charge. Obviously since the global financial system is still intact the answer, implicit or explicit, has always been “yes, keep harvesting us and accumulating vast fortunes and immense power.”

But that might be about to change. Most European countries are holding elections for the European Parliament this weekend, and the results imply that a sizable number of voters have peered behind the curtain and don’t like what they see. As possible future British Prime Minister (!!!) Nigel Farage put it today, the results constitute “an earthquake”:

UKIP on course to top European election in UK

UKIP leader Nigel Farage said his party was on track to win the European elections, which “will be an earthquake because never before in the history of British politics has a party seen to be an insurgent party ever topped the polls in a national election”.

He suggested the results could lead to Nick Clegg losing the Lib Dem leadership, Labour leader Ed Miliband needing to “change his position” on an in/out referendum and David Cameron being forced into “a much tougher negotiating stance” on Europe.

Britain, of course, is a member of the European Union but not the euro currency bloc. So as interesting as UKIP’s ascendancy is, electoral results in the major eurozone countries are even juicier. France in particular:

Protest parties surged in Greece and France in European Parliament elections, in a sign of the anti-European mood across the economic divide opened up by the sovereign debt crisis.

Voters in Greece, the first crisis victim, handed first place to Syriza, the party which argues the bailouts weren’t generous enough, according to a NERIT TV exit poll that gave it as much as 30 percent support. In France, the anti-immigration National Front led with 25 percent, estimates by TNS Sofres, Ipsos and Ifop showed.

“The sovereign people have declared that they are taking their destiny back into their own hands,” Marine Le Pen, head of the National Front, told a rally in suburban Paris broadcast on France 2 television. It is time for “politics of the French, for the French, with the French.”

Initial returns in the 28-nation election indicated swelling support for political groups that blame the European Union for economic injustice — symbolized by a bloc-wide 10.5 percent unemployment rate — and say its leaders are letting immigration get out of hand. National returns will be released throughout the evening, with the first EU-wide projections due after 11 p.m. in Brussels.

National Impact
Early results were broadly in line with projections by PollWatch 2014, a non-partisan forecasting group, that fringe parties would combine for 30 percent in the new parliament, up from 20 percent now. While that outcome is unlikely to upset EU lawmaking, it will rattle national leaders such as Greek Prime Minister Antonis Samaras.

The breakthrough by France’s National Front dealt a further blow to President Francois Hollande, the least popular leader in France’s modern history. The National Front has cashed in on economic discontent, with jobless claims at a record of more than 3 million and an economy that has barely grown in two years.

Le Pen called on Hollande to dissolve the French national parliament and hold new elections, saying that he had little choice after such “a humiliation.”

Probably not a lot legislatively in the short run. EU elections generally have low turn-out (because most voters don’t seem to care who represents them in Brussels), so protest parties sometimes rack up totals that exaggerate their true popularity. In any event, pro-EU and pro-eurozone parties are still nominally in charge and will continue with business as usual in the year ahead.

But they might have just one more election cycle in which to do so. In France, for instance, the socialists got just 15% of the vote, which must be a record low for the ruling party of a major country. UKIP and National Front may be within striking distance of actual working majorities in Britain and France, respectively, and another few years of the current European malaise (almost guaranteed under current policies) would pretty much hand the next election to the insurgents. Same thing in Greece and several other EU countries.

And THAT would be an earthquake. Electing people who promise to withdraw their countries from major international organizations and go back to previous ways of running immigration and monetary policy would call the euro into question as a reserve currency. That in turn would send the leveraged speculating community, which has recently gorged on PIIGS country euro-denominated bonds, into chaos.

This prospect virtually guarantees that the European Central Bank will start buying up Italian, Spanish and Portuguese bonds on a vast scale, while it still can.