PIMCO’s Gross: QE3 is Back On If Job Reports Are Weak 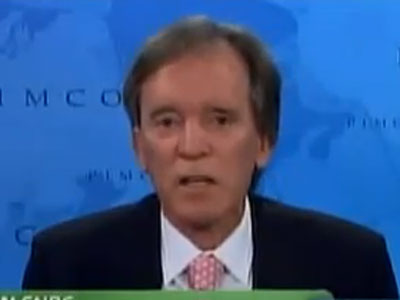 Bill Gross of PIMCO spoke to Bloomberg TV’s Trish Regan this afternoon and said that he is doubtful of another round of quantitative easing in June, but “if we see some weak employment reports over the next two months, then QE3 is back on.” He also said that there’s a risk of a double-dip recession “if liquidity disappears.”

Gross went on to say that “euro land is a dysfunctional family…more dysfunctional than Democrats and Republicans in Washington, DC.”

Gross on whether he’s betting on another round of quantitative easing:

“I don’t at the moment. I am willing to listen and I did listen intently at the press conference and to prior speeches from Janet Yellin and Mr. Dudley in New York. The big three at the Fed I think have moved closer to the middle in terms of the need for additional QE. They in the market are going to wait for the next eight weeks for two key employment Friday reports between now and then, as well as tomorrow’s GDP number, which I think should be judged in my opinion by nominal growth as opposed to real growth. The Fed does not target nominal GDP. They target inflation though. They want lower unemployment, which requires 3% real growth. So the 2 plus the 3 equals a 5% nominal GDP growth target, which the Fed really wants to shoot for. So watch tomorrow’s numbers and don’t be dissuaded by the 2.5% number or the 3% real growth number. It’s the nominal growth number that is key.”

On whether the Federal Reserve will resist an additional round of quantitative easing:

On whether he would rule out QE3 down the road: