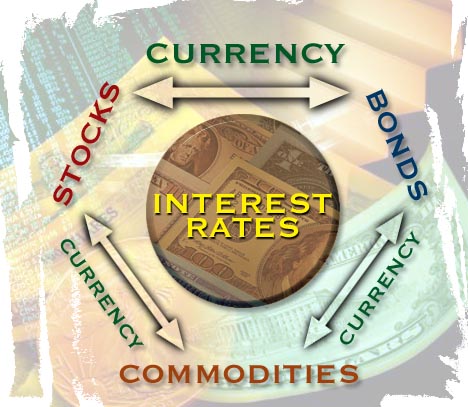 Momentum and sentiment numbers are at levels associated with previous important tops. As noted last week, insider selling has also reached that level. We keep in mind the dramatic Outside Reversal in so many key items on March 8. Some thought it was triggered by Bernanke’s comments on that day.

Our view has been that markets were primed for change, and the reversal was a “heads up”.

Another such dramatic reversal will be critical.

Stock markets have had a very good run. But, in these times there are no long-term trends. Rallies become so compulsive – as do the inevitable sell-offs.

From the troubles of last August-September the gain has been 30 percent, and counting, in only five months. Fears of October have been forgotten as the favourable season continues. Last week, we noted that firm crude oil prices would “sustain speculative interest in the general stock markets”.

Recent interest is focusing upon Apple, which is a phenomenon, and the banks, which is a caution. The latter (BKX) have enjoyed a sharp rally on almost certain knowledge that the “stress test” would be benign [1]. It should be stressed that the test is a computer model build on macroeconomic assumptions. For more than a decade, Mister Market has shown little regard for such models.

The 13 percent rally in a couple of weeks has driven the RSI to the level reached with the high at 59 last April. That was an important high and the subsequent low was 33 in the gloom of October.

One of the features of important tops is that all sectors may not peak at the same time. Base metal mining stocks (SPTMN) topped in late January and the Transports in early February. The recent high for the Oil Patch was at the end of February.

At the short-end, spreads stopped narrowing a month ago, but have yet to reverse. At the long end – corporate spreads continued to narrow.

Over in the dreadful world of sub-prime the strong rally from October ended in Early February. The price has declined to a narrow trading range. No break down.

The “saucering” bottom in the twenty-year yield has resulted in a distinctive rise in rates. In so many words, the top is in for the bond contract and the action has rolled over. Some of the decline could be due to firm economic numbers, but it is worth keeping in mind that the long bond has been a huge asset in play and the play appears to have ended.

However, the municipal sector has not been doing well. After registering an Upside Exhaustion in February, the MUB has suffered a sharp decline. Last week, the NPI accomplished a big test of the high set in early February. The three-day decline has been interesting.

Once again, the street is hot on commodities.

Base metals (GYX) enjoyed a good rally to an RSI in early February that has ended recent rallies. The chart is in a narrowing wedge that will likely fail and set the down trend.

Grains (GKX) are still in a modest rise.

Crude is in a favourable season that could run for a number of weeks.

Last week we noted that the dollar was still in the pattern that has led to important rallies. Rising through 80 would be an important step and the action yesterday almost made 81, but needed a little rest. This could run into next week.

Signs of the Times

“Better-than-expected data on confidence and manufacturing bolstered optimism on the economy.”

“Temperatures Lowest For Time of Year Since 1940s”

“Global mining industry remains optimistic that the commodity boom is going to run for years.”

“The outlook for global growth is very good for commodities…it’s a good story.”

“The [stock] bull market that no one believes”