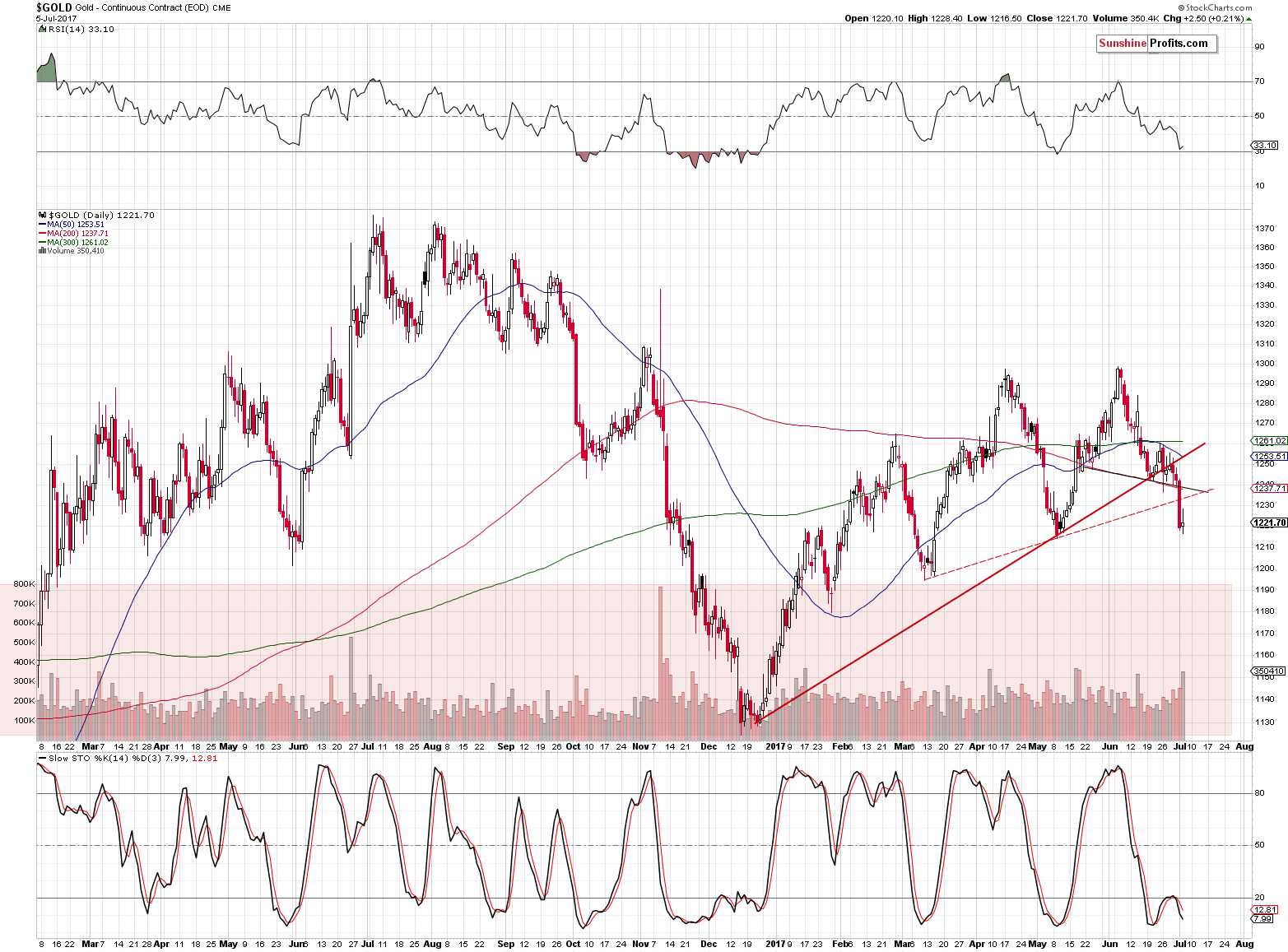 Briefly: In our opinion, full (100% of the regular full position) speculative short positions in gold, silver and mining stocks are justified from the risk/reward perspective at the moment of publishing this alert.

Gold and silver didn’t continue Monday’s plunge, but they didn’t erase it either. Have we just seen a reversal or just a normal, healthy pause after a sharp move?

The former seems more likely and the price levels that were reached (and those that were not) provide the details. Let’s move right to the charts (chart courtesy of http://stockcharts.com). Gold moved back up on an intra-day basis, but finally ended the session without significant changes. At the moment of writing these words, gold is trading at about $1,223, so the situation didn’t change much overnight either. Please note that the volume that accompanied yesterday’s back and forth movement was significant, but the same was the case on June 14th – back then it was only a pause within the decline. Consequently, it doesn’t seem that the sizable volume is a bullish sign at this time.

The RSI indicator is close to 30, however, the comeback of the regular gold-USD link and the situation in the USD and Euro Indices seems to be much more important. After all, if gold is to move below the 2015 low this winter, then it’s about time it started a bigger decline, and during bigger moves, the daily RSI can stay below 30 for prolonged periods (November and December 2016 serve as examples).

The SLV ETF chart shows that silver moved a bit higher, but not above any important support/resistance line that it had previously broken. It remains below the May low and below the rising resistance line. Consequently, it doesn’t seem that anything changed based on yesterday’s session.

In yesterday’s alert, we wrote the following on the Japanese yen:

The yen did something unlikely – even though it had moved to support levels and broke above the resistance line (and it still seems that taking profits from the trading position in this currency pair was justified), it declined sharply on Monday, breaking through (and closing below) 3 support lines: the short-term one based on the recent tops and 2 medium-term ones based on previous lows. The short-term outlook for the Japanese yen has just deteriorated substantially.

(…) the change in the short-term outlook implies that the 2017 corrective upswing is over and that the yen can now move substantially lower (below the 2016 low and quite possibly below the 2015 low as well). Given the strong gold-yen link, the above has profoundly bearish implications for the precious metals market.

During yesterday’s session, the yen moved somewhat higher, but not above any important resistance level. Consequently, nothing changed from the technical point of view and the outlook for the yen – and for gold – remains bearish.

Finally, we would like to remind you of a very specific situation in the ratio between gold and the broad stock market. This ratio moves along with gold and visible divergences can tell a lot about gold’s next big move.

In early 2011, the ratio was reluctant to break above the previous high and it only did so by an insignificant amount – this divergence heralded declines and we have indeed seen a major top.

In the second half of 2012, the ratio barely moved higher even though gold moved quite close to its 2011 top. This major divergence indicated trouble ahead and that’s exactly what the gold market got – the yellow metal declined very substantially in the following months.

We are currently once again in a situation in which the ratio moved lower and it appears ready to break to much lower levels. Will gold follow? That’s exactly what happened in the previous cases, so why should this time be any different?

The ratio formed a very specific price pattern (actually two patterns) and it’s about to complete them. The ratio formed a head-and-shoulders pattern (this year’s performance) as a right shoulder of a bigger head-and-shoulders pattern (the second half of 2015 being the left shoulder and the 2016 performance being the head). Once gold moves lower while stocks rally, the ratio is likely to plunge further and based on the mentioned patterns, the move is not likely to be minor. The target based on the size of the head suggests a repeat of the 2016 decline in the ratio – or a bigger decline, which could correspond to a move to the ratio’s 2003-2005 lows. What could the gold price do? It could repeat what happened during the previous big slide of the ratio – the 2013 decline. This methodology would imply gold at about $900, which is in tune with our downside target for gold based on other techniques.

Summing up, it seems that yesterday’s price move was a natural pause after a sharp decline and not a major reversal. The short-term outlook remains bearish.

Most importantly, however, please keep in mind that the biggest buying opportunity for the precious metals is likely just months (not years) away.

As always, we will keep you – our subscribers – informed.

Trading capital (supplementary part of the portfolio; our opinion): Short positions (100% of the full position) in gold, silver and mining stocks are justified from the risk/reward perspective with the following stop-loss orders and initial target price levels / profit-take orders:

Long-term capital (core part of the portfolio; our opinion): No positions (in other words: cash)

Please note that the in the trading section we describe the situation for the day that the alert is posted. In other words, it we are writing about a speculative position, it means that it is up-to-date on the day it was posted. We are also featuring the initial target prices, so that you can decide whether keeping a position on a given day is something that is in tune with your approach (some moves are too small for medium-term traders and some might appear too big for day-traders).

Plus, you might want to read why our stop-loss orders are usually relatively far from the current price.

Please note that a full position doesn’t mean using all of the capital for a given trade. You will find details on our thoughts on gold portfolio structuring in the Key Insights section on our website.

As a reminder – “initial target price” means exactly that – an “initial” one, it’s not a price level at which we suggest closing positions. If this becomes the case (like it did in the previous trade) we will refer to these levels as levels of exit orders (exactly as we’ve done previously). Stop-loss levels, however, are naturally not “initial”, but something that, in our opinion, might be entered as an order.

Since it is impossible to synchronize target prices and stop-loss levels for all the ETFs and ETNs with the main markets that we provide these levels for (gold, silver and mining stocks – the GDX ETF), the stop-loss levels and target prices for other ETNs and ETF (among other: UGLD, DGLD, USLV, DSLV, NUGT, DUST, JNUG, JDST) are provided as supplementary, and not as “final”. This means that if a stop-loss or a target level is reached for any of the “additional instruments” (DGLD for instance), but not for the “main instrument” (gold in this case), we will view positions in both gold and DGLD as still open and the stop-loss for DGLD would have to be moved lower. On the other hand, if gold moves to a stop-loss level but DGLD doesn’t, then we will view both positions (in gold and DGLD) as closed. In other words, since it’s not possible to be 100% certain that each related instrument moves to a given level when the underlying instrument does, we can’t provide levels that would be binding. The levels that we do provide are our best estimate of the levels that will correspond to the levels in the underlying assets, but it will be the underlying assets that one will need to focus on regarding the signs pointing to closing a given position or keeping it open. We might adjust the levels in the “additional instruments” without adjusting the levels in the “main instruments”, which will simply mean that we have improved our estimation of these levels, not that we changed our outlook on the markets. We are already working on a tool that would update these levels on a daily basis for the most popular ETFs, ETNs and individual mining stocks.

As always, we’ll keep you – our subscribers – updated should our views on the market change. We will continue to send out Gold & Silver Trading Alerts on each trading day and we will send additional Alerts whenever appropriate.

The trading position presented above is the netted version of positions based on subjective signals (opinion) from your Editor, and the Tools and Indicators.