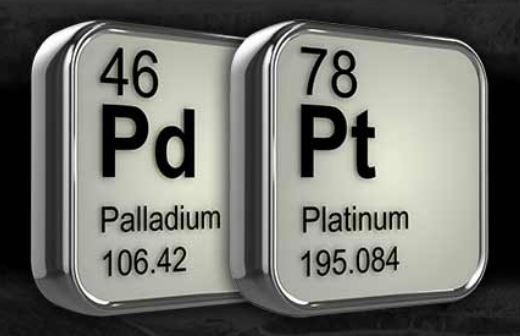 Palladium (Pd) prices are up 75% in the past 12 months. Do you play it, or has the train already left the station?

The automobile sector, specifically for use in catalytic convertors, annually consumes about 80% of the available palladium. And stricter global emissions regulations are increasing the usage on a per vehicle basis in big consumer markets like China and India. The increased demand has pushed the palladium market into a deficit since 2012, and 2020 looks to be another year of shortage.

If you want to participate, you can buy physical palladium or you can buy the ETF PALL. But one look at the PALL chart may cause you to remember the Great Fool Theory. 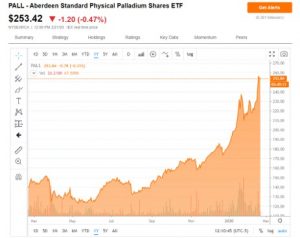 A better way may be to buy shares in a few companies that either mine or explore for the precious metal, as they offer more leverage to the gains in Pd pricing. Of course, they also carry additional risks.

The top 5 mining companies deliver 85% of the global platinum and palladium production and have, in aggregate, over US$100 billion in market capitalization:

There is a major issue, and potential opportunity, with these companies. Around 80% of that global palladium mine production comes from countries with pretty significant political risk, i.e. South Africa 39% and Russia 40%.

Neal Froneman, CEO of Sibanye Goldone, one of South Africa’s biggest Pd miner said last month: “We don’t see growth opportunities here, so we have to think outside of South Africa”.

The South Africans have already made acquisitions in USA and Canada in the past few years in a bid to diversify away from South Africa. Sibanye Gold paid US$2.2B for Stillwater’s USA assets in May 2017 and in December 2019 Impala paid $750 million for North American Palladium’s Canadian assets.

Which means there may be an opportunity to look farther down the mining and exploration development and risk scale for potential value. Here is a list of Toronto Venture Exchange listed Platinum Group Metals (which includes Platinum and Palladium) explorers which have projects in the Americas.

The key driver for these early stage players? Palladium miners are cash rich and looking to grow their production in safe countries.