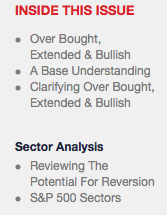 This past week was quite eventful as the Federal Reserve made a rather boring policy announcement, Scotland voted for its independence and Alibaba posted the largest IPO ever.

The reassurance by the Federal Reserve that monetary policy would remain “accommodative” removed concerns that the Fed, while not “refilling the punchbowl,” are not “removing” it altogether. Then, Scotland decided to remain united with the United Kingdom. This brought additional relief to markets as concerns over disruption in currencies, and other imbalances were resolved quickly.

This “relief” put enough upward pressure on the markets to create a short covering push that drove the S&P 500 to new all-time highs and pushed the markets into further overbought, extended, bullish territory. When I discuss this, I am often asked exactly what is meant by such a statement. This week, I am going provide a basic course in technical analysis as the “overbought, bullish and extended” theme is likely to remain intact for several months to come.