How the Rising Dollar Could Trigger the Next Global Financial Crisis

Posted by John Mauldin - Outside the Box 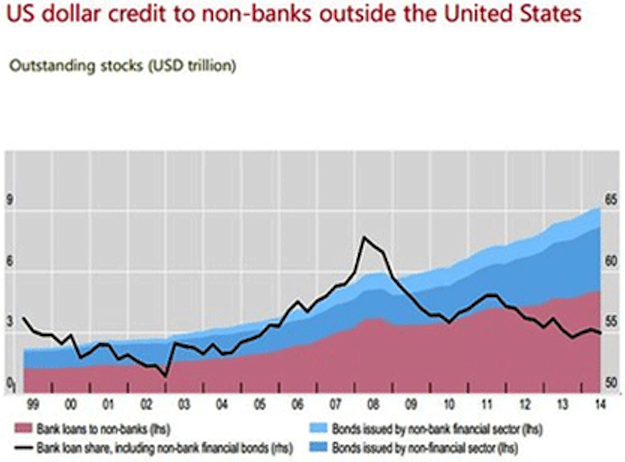 This week’s Outside the Box continues with a theme that I and my colleague Worth Wray have been hammering on for some time: the very real potential for a rising dollar to trigger the next global financial crisis.

We are concerned about the consequences of multi-speed economic growth around the world and the growing divergence between major central banks. In our opinion, if these trends persist, they likely mean (1) a major US dollar rally, (2) a rapid unwind of QE-induced capital flows to emerging markets, (3) a hard slide in fragile emerging-market and commodity-exporter currencies, and (4) financial shocks capable of ushering in a new global financial crisis.

Alongside true macro legends like Kyle Bass, Raoul Pal, Luigi Buttiglione, and Raghuram Rajan, Worth and I have written about this theme extensively in 2014 (“Central Banker Throwdown,” “Every Central Bank for Itself,” “The Cost of Code Red,” “Sea Change,” “A Scary Story for Emerging Markets”). Now it’s quickly becoming a mainstream macro theme on almost everyone’s radar. Virtually every economist and investment strategist on Wall Street has a view on the US dollar and the QE-induced carry trade into emerging markets… and anyone who doesn’t should start looking for a different job.

Policy divergence is really the only macro theme that matters right now. And on that note, the Bank for International Settlements just released its predictably must-read quarterly review, with an urgent warning:

The appreciation of the dollar against the backdrop of divergent monetary policies may, if persistent, have a profound impact on EMEs [emerging-market economies]. For example, it may expose financial vulnerabilities as many firms in emerging markets have large US dollar-denominated liabilities. A continued depreciation of the domestic currency against the dollar could reduce the credit worthiness of many firms, potentially inducing a tightening of financial conditions.

Echoing those comments on Twitter, the “bank for central banks” reiterated how this trend affects all of us (feel free to follow us at @JohnFMauldin and @WorthWray):

This is in spite of continued efforts by central banks to ease monetary conditions. Calling attention to that very risk in our Halloween edition of Thoughts from the Frontline, Worth explained that the catalysts are already in position to spark a collapse in a number of fragile emerging markets if the dollar moves even modestly higher (into the low 90s on the DXY Index); but we have struggled to quantify the actual size of the nebulous USD-backed carry trade that could now come unwound at any moment.

Reasonable estimates range from $2 trillion to $5 trillion. The true number could be even larger if more speculative money has slipped through the cracks than has been officially reported in places like China; or it could be smaller if a significant portion of recent inflows represents a more permanent deepening of emerging-market financial systems rather than an attempt to escape financial repression in the developed world. It’s hard to know for sure, and that’s why this week’s Outside the Box is so important.

In a recent presentation at the Brookings Institution, BIS Head of Research and Princeton University Professor Hyun Song Shin shared his research revealing that dollar-denominated credit to non-bank offshore borrowers is now more than $9 TRILLION and at serious risk in the event of continued policy divergence. I’d encourage you to listen to or download an audio recording of Dr. Shin’s presentation, and take some time to flip through his slides; but David Wessel’s cogent summary, which follows in today’s Outside the Box, will give you an idea of what may happen as the US dollar rallies. It’s short, sweet, and REQUIRED READING for anyone who wants to understand where the global financial system is heading in the coming quarters.

Then we wrap up with an essay on the same theme by my friend Mohamed El-Erian, who is typically not as strident in his wording; but for those of us who know Mohamed, this is the equivalent of him pounding the table:

Avoiding the disruptive potential of divergence is not a question of policy design; there is already broad, albeit not universal, agreement among economists about the measures that are needed at the national, regional, and global levels. Rather, it a question of implementation – and getting that right requires significant and sustained political will.

The pressure on policymakers to address the risks of divergence will increase next year. The consequences of inaction will extend well beyond 2015.

For readers interested in this theme, let me also offer a link to some on-the-record remarks from Claudio Borio, the head of the Monetary and Economic Department at the BIS, and Dr. Shin, preceding the release of the BIS quarterly report. For a representative of such a staid and sober organization, Mr. Borio uses a lot of rather disconcerting terms. He is clearly very concerned. Again, you can read the full BIS quarterly review here.

I’ve spent some time this week working with Jack Rivkin and our respective teams at Altegris and Mauldin Economics, putting together the lineup for our 2015 Strategic Investment Conference. I think it will be our best conference ever. You should definitely save the dates April 29 through May 2, as this will be a can’t-miss conference. We will get you more details soon.

I trust your week is going well. We are planning for the holidays and looking forward to some great family time. We’ll see if a new grandchild shows up in time for Christmas or decides to become a New Year’s baby.

Your thinking about 2015 analyst,

John Mauldin, Editor
Outside the Boxsubscribers@mauldineconomics.com

How the Rising Dollar Could Trigger the Next Global Financial Crisis

Hyun Song Shin, who is on leave from Princeton while chief economist at the Bank for International Settlements in Basel, spends a lot of time wondering what could cause the next financial crisis. He suspects it will be something different from the leveraged bets on housing that were at the root of the last crisis.

So, what might it be? Perhaps the steady rise of the U.S. dollar on global currency markets.

(Mr. Shin and colleagues at the Bank for International Settlements elaborated on his latest analysis in the bank’s new Quarterly Review posted Sunday.)

Here’s how Mr. Shin sees the world: A manufacturer in an emerging market borrows in dollars, perhaps because it sells a lot of goods in dollars and sees borrowing in dollars as a hedge. A local bank lends the dollars, borrowing from some big global bank. When the emerging-market currency is strong and the dollar is weak, that manufacturer’s balance sheet looks sturdier–and the local bank sees that and lends more readily. Thus a weak dollar can lead to a global credit boom.

When the dollar rises, though, all this runs in reverse, effectively tightening global financial conditions, particularly in emerging markets. The emerging-market currency falls. The manufacturer has trouble making payments on its dollar loans;  so do its peers. Banks lend less readily. Capital investment stalls.  Global money managers–the ones with lots of short-term wholesale deposits that search the world for the best yields–see a falling local currency and a weakening economy and pull  money from the emerging-market banks.

Then, global asset managers who had been lured by a high-growth story see that it is now over and do the same thing, selling emerging-market corporate bonds. That pushes up interest rates that businesses in emerging markets have to pay, and weakens them further in a vicious cycle.

“Even if you have long-term investors and you don’t have [leveraged investors], if events in the financial markets translate into events in the real economy, you can get a feedback loop,” Mr. Shin says. And this, he adds, is a very different mechanism than the insolvency of highly leveraged financial institutions that was at the heart of the recent global financial crisis.

All this is a timely reminder that all the important steps taken to strengthen the foundations of the world’s banks in response to the last crisis aren’t a cause for complacency.

David Wessel is director of the Brookings Institution’s Hutchins Center on Fiscal & Monetary Policy and a contributing correspondent to The Wall Street Journal. He is on Twitter: @davidmwessel.