Our “Storm Warning” for the Year Ahead… 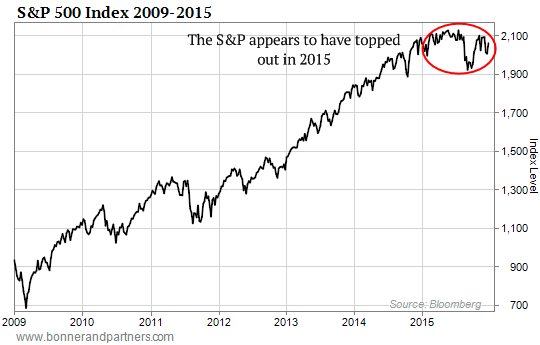 Égorger vos fils, vos compagnes! / To cut the throats of your sons, your women!

PARIS – And so the old year ended…

The Closerie des Lilacs brasserie was packed. Every table was taken.

On the corner of the Boulevard de Montparnasse and the Boulevard Saint-Michel, this was one of Hemingway’s favorite restaurants. It is now popular with tourists as well as locals.

Coming in, we heard familiar American accents behind us, but almost everyone else appeared to be native to the city.

It was bright, the way brasseries are supposed to be…

“The way things are supposed to be” is our beat at the Diary. The way they really are is beyond us.

“Is,” as President Clinton noted, is too high a standard. “Ought to be” is the best we can do.

Only the gods can know what is really going on. All we can do is to observe certain superficial patterns and rules – like waves on the surface of a deep sea – and wonder how they might slap against our little bark.

One observation: Markets bob up and down.

But at least we know how the waves work… floating prices up one side and down the other.

And so let’s begin 2016 by looking at the choppy waters. Where are we? Are we on the upside? Or the downside?

Those losses are especially remarkable because it was another near record year of stock buybacks.

Cheap debt financing is a major source of funds for share buybacks. And U.S. corporations rushed to abuse the Fed’s EZ credit while it was still available to them.

Now, according to the Wall Street Journal, “Investors have low expectations for 2016.” Meanwhile, the Chinese economy is still slowing… and stocks there are still extremely volatile. (See more below in today’s Market Insight.)

World trade – as indicated by shipping costs as well as import and export figures – is falling.

Railcar and heavy truck orders are at a standstill. Construction equipment sales have collapsed. Capital investment, generally, is depressed. And in dollar terms, the entire world economy is in recession.

And after more than 20 years of excessively easy money… and seven years of the lowest short-term interest rates in history… the Fed has started to raise interest rates.

Remember, this is an economy that lives on credit. The world depends on it. Take it away, and you’ve got trouble. Here’s economist and author Richard Duncan of Macro Watch:

Between 1952 and 2008, every time credit growth (adjusted for inflation) fell below 2%, the U.S. went into recession. During that period, the ratio of total credit to GDP rose from 150% to 380%. In other words, credit growth drove economic growth; and when credit did not grow, neither did the economy.

The feds have offered so much cheap financing that the economy can no longer live without it. Which is why we don’t think the Fed won’t raise rates by much more.

As soon as the economy shows signs of palsy, it will back off. Duncan:

Credit growth looks likely to fall back below the 2% recession threshold next year. If the Fed’s inflation forecasts are correct, then credit growth (adjusted for inflation) could fall to 1.6% [in 2016] and to only 1.0% in 2017.

This makes the economy vulnerable to recession… and stocks vulnerable to a sell-off. That’s the way we think it is supposed to work. Will it actually work that way?

Getting into the Spirit

So, we return to the scene on New Year’s Eve… to the brasserie, with brass fixtures and rails reflecting the light onto the leather seats and tiled floor.

There was a band of four people. A violinist. A guitarist. An accordionist. And a singer in a tight red dress. They mostly played the French classics, with a special fondness for Edith Piaf.

We were there with four of our children and two of their friends.

“Normally we probably wouldn’t have been able to get a table on such short notice,” said Sophie, one of the friends – a beautiful woman with curly dark hair.

“But Paris is empty. After the terrorist attack last month, tourists canceled their plans to spend the holidays here. Especially Americans. Americans seem to be most worried about terrorism, which is odd, because they have the least to worry about…”

Since attacks by Islamic State on Paris last November, there have been no further incidents. Despite being surrounded by about 2 million Muslims – who tend to live in the suburbs of Paris – the city has, so far, been spared further violence.

“My son is a gendarme,” said a neighbor after the church service last week.

“He is stationed near Paris. On Christmas Eve, he was sent to guard [the cathedral] Notre Dame. They were afraid terrorists would attack during midnight Mass. Can you imagine the huge tragedy that might have happened?

“They had hundreds of policemen there. But all you’d have to do is to make the sound of a gun going off in the cathedral and there could have been panic… with hundreds of people dead in the stampede.”

There must be a million soft targets here in Paris. Anyone could blow up a metro station, a bar, or a church – with a fair chance of getting away. And yet, as far as we can tell, things have gone back to normal… the way they are supposed to be.

“Dix… neuf… huit… sept…” the singer had begun the final countdown of the year.

We cheered. We clapped. We rose from our seats and embraced one another.

The band struck up what must have been the French equivalent of “Auld Lang Syne.” We didn’t know it.

But then came the familiar notes of the French national anthem, “La Marseillaise.”

The French are not a patriotic people by American standards. They do not hang out flags. They do not put bumper stickers on their cars telling others how proud they are to be French.

Like thinking people everywhere, they are more often embarrassed by their government than proud of it. And it is practically unheard of to sing the French national anthem in restaurants.

But after the November attacks people seem to be getting in the spirit of it. So, we all sang with gusto… idling through the unknown verses and opening up full throttle for the chorus.

Further Reading: With credit growth set to slow below the crucial 2% level in 2016 and 2017, the major credit collapse Bill has been predicting may not be far off…

So you can be prepared for what’s coming – and so you can protect yourself and your money – Bill has released a critical investor presentation. Watch it here now.