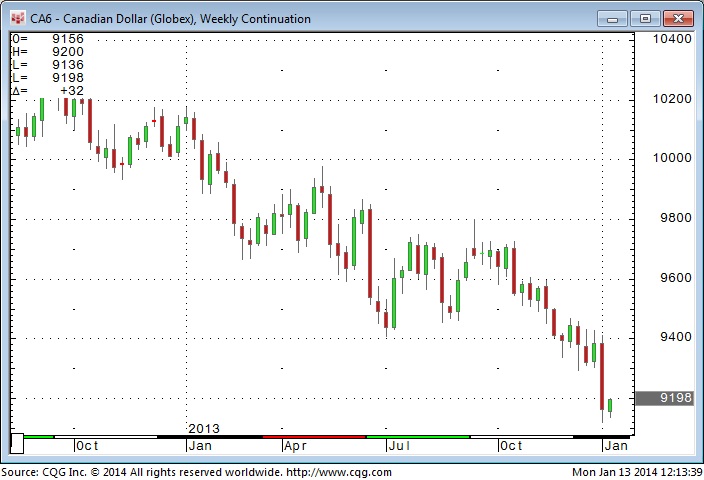 Is the Canadian Government secretly happy that the Canadian Dollar has been the world’s weakest currency so far this year? David Rosenberg (www.gluskinsheff.com) seems to think so…David had been very bullish on the CAD as recently as last fall…and he remains long-term bullish on the CAD…but last week he wrote that he thinks there was a political decision made over a year ago…at the highest levels in Ottawa…to lower the value of the CAD. This political decision lead to the appointment of Stephen Poloz to replace Mark Carney as head of the BOC…instead of Tiff Macklem, the BOC insider who was the presumed front-runner for job.

I think that the big rally in the CAD over the last 10 years…from the 60-70 cent level to around par…was seen by our government as too much / too fast for the Canadian economy (especially in Quebec and Ontario) to digest and that Canada has quietly joined the long list of countries that are purposely trying to gain a competitive advantage through a lower currency.  I should have realized that Stephen Poloz’s surprise appointment last year signaled a political sea-change given that he was widely seen to be sympathetic to the problems of Canadian exporters.

Last week the CAD traded with a 9100 handle…down ~14% from the 1.06 highs it reached in 2011…a decline that was broadly in sync with falling commodity prices. However, last week’s lower CAD was odd given that both the AUD and NZD…the other two commodity currencies…rose against the USD. Perhaps the recent comments on the CAD by finance minister Jim Flaherty…together with the much-weaker-than-expected Canadian employment report were enough to drive the CAD to 4 ½ year lows against the USD and 3 year lows against the EUR…the CAD has fallen ~23% against the EUR in the last 18 months…which might reduce the flow of Canadian tourists headed for Europe…but increase the flow of European tourists headed for Canada!

Trends are particularly powerful in the currency markets:

I’ve been trading currencies for 35 years and I’ve noticed that once a currency starts trending it can go WAY further than seems to makes any sense. One reason for this is what we used to call “Leads and Lags” which meant that import/export businesses that benefited from a falling currency tended to “go slow” implementing their conversions or hedging operations while those businesses that suffered from a falling currency tended to “speed up” or bring forward their conversions or hedging operations. These activities help to reinforce existing trends…and the more a currency trends the more businesses will  behave in this manor…creating a self-reinforcing loop.

Speculators like to jump on trends in the currency markets:

No short term market arbitrage to reign in a run-away currency:

Another consideration that adds to the “overshooting” aspect of currency values is that there is no short term  “substitution” or “arbitrage” effect that can “reign in” a runaway currency. For instance, if the price of coal gets way too high relative to the price of natural gas, or vice versa, then power generating businesses will try to switch from the expensive fuel to the cheaper fuel…thereby reducing the demand, and likely the price, of the higher priced commodity. This kind of switch or substitution isn’t as readily available in the currency world to act as a natural brake on a run-away currency.  For instance, an American business that buys CAD to pay for products or services from Canada will have no choice (at least in the short term) but to continue buying CAD to pay for those products or services…no matter how high the CAD rises…they cannot pay for those products or services with Euros or British Pounds. Obviously, on a longer term time frame, changes in currency values produce important swings in buyer behavior…the Japanese are obviously hoping that the sharp decline in the Yen over the last 18 months will make their exports more attractive than those made by their competitors.

Huge speculative short positions have been building against the CAD in the futures markets over the past few months. While the futures markets are much smaller than the OTC inter-bank market they are thought to reflect the same kind of positioning.  All serious CAD traders are aware of these unusually large short positions and understand that if the CAD starts to rise then short-covering could goose the CAD sharply higher.. But the CAD bears have been adding to their short positions…not covering them…and if the idea that the Canadian government wants to see a lower currency gains any “traction” in the marketplace then the CAD bears may become even more aggressive.