OPEC Going Broke, Dumping Dollars. Is That Good Or Bad? 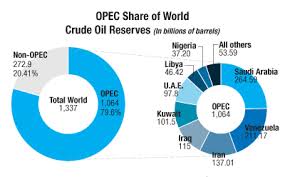 When oil prices fell out of bed last winter there was much hand-wringing over the fate of the former beneficiaries of high-priced crude. Trillions of dollars of junk bonds issued by frackers, for instance, might default, oil field services companies could fail, and layoffs in the oil patch might swamp the nascent employment recovery.

Some of this has happened, though not on the apocalyptic scale the worst-case scenarios suggested. More might be coming, but right now it’s not headline news in North America.

For OPEC, however, the sudden 50% diminution in export revenue is a clear and present danger, and the response is noteworthy:

Now that oil prices have dropped by half to $50 a barrel, Saudi Arabia and other commodity-rich nations are fast drawing down those “petrodollar” reserves.

In the heady days of the commodity boom, oil-rich nations accumulated billions of dollars in reserves they invested in U.S. debt and other securities. They also occasionally bought trophy assets, such as Manhattan skyscrapers, luxury homes in London or Paris Saint-Germain Football Club.

Now that oil prices have dropped by half to $50 a barrel, Saudi Arabia and other commodity-rich nations are fast drawing down those “petrodollar” reserves. Some nations, such as Angola, are burning through their savings at a record pace, removing a source of liquidity from global markets.

If oil and other commodity prices remain depressed, the trend will cut demand for everything from European government debt to U.S. real estate as producing nations seek to fill holes in their domestic budgets.

“This is the first time in 20 years that OPEC nations will be sucking liquidity out of the market rather than adding to it through investments,” said David Spegel, head of emerging markets sovereign credit research at BNP Paribas SA in London.

Saudi Arabia, the world’s largest oil producer, is the prime example of the swiftness and magnitude of the selloff: its foreign exchange reserves fell by $20.2 billion in February, the biggest monthly drop in at least 15 years, according to data from the Saudi Arabian Monetary Agency. That’s almost double the drop after the financial crisis in early 2009, when oil prices plunged and Riyadh consumed $11.6 billion of its reserves in a single month.

Algeria, one of the world’s top natural gas exporters, saw its funds fall by $11.6 billion in January, the largest monthly drop in a quarter of century. At that rate, it will empty the reserves in 15 months.

Excluding Iran, whose sales are subject to some sanctions, members of the Organization of Petroleum Exporting Countries are expected to earn $380 billion selling their oil this year, according to U.S. estimates. That represents a $350 billion drop from 2014 — the largest one-year decline in history.

“The shock for oil-rich countries is enormous,” Rabah Arezki, head of the commodities research team at the IMF in Washington, said in an interview.

Oil-rich countries will sell more than $200 billion of assets this year to bridge the gap left between high fiscal spending and low revenues, Spegel said.

When a central bank wants to tighten monetary policy, it sells bonds from its portfolio to investors in return for cash. That shrinking supply of spendable funds slows the economy down, moderates inflation — and frequently causes a recession.

Saudi Arabia selling bonds has exactly the same effect, but on a global scale, depending on which bonds are being sold for which currency. So the projected $200 billion of annual asset sales by oil exporters will be a modest (compared to US, Japanese or European QE programs) tightening of world monetary policy, other things being equal.

In ordinary times this would push interest rates up a bit. But with central banks and their unlimited currency creation machines now dominating the market it may not make much of a difference.

And in a perverse way these bond sales provide more liquidity to a tight part of the market. It seems that central banks have been buying up all the high quality debt in the global financial system, leaving pension funds and bond funds that need such paper unable to get enough of it (an astounding situation when you think about it: Governments around the world are borrowing trillions of dollars each year but there’s not enough of that debt to satisfy pension funds). See The Worldwide Deficit of High-Quality Debt.

So, a non-event? Let’s not go that far. Oil exporting countries have designed their budgets around the assumption of much higher oil revenues. And many of them have failed to diversify their economies and create entrepreneurial cultures for the day when the oil is gone. So if prices stay low for a few more years they’ll start to run out of reserves, default on their debt, etc., etc. Maybe that’s the oil market black swan that we should be worried about.