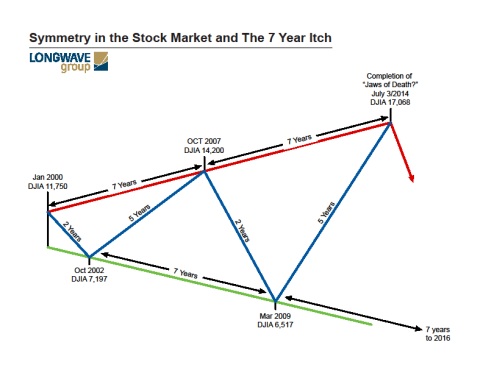 “The world is a mess right now, geopolitical trouble brewing all over the place, and now we see the Ebola virus threatening to become a worldwide pandemic. Hong Kong, Ukraine, ISIS, Libya, Gaza, Irannukes, North Korea, Secret Service, for starters. This is what happens during major Bear Markets, which is what we now have, Grand Supercy-cle degree wave {IV}down. This is because we are measuring the collective psyche of mankind with technical analysis, which is now telling us we are entering a period of se-vere strife. It is going to get a lot worse.

In his book, “The Coming Economic Ice Age” Dr. Robert McHugh warns readers that we are nearing a very major decline in equities given the massive “megaphone” formation that is taking shape in the Dow and many other major indexes around the world. In the book he shows that the same formation was present before other major equity market declines such as 1929, 1957, 1966, 1973, 1987, 2000 and 2008. In fact all major declines since the 1930s have had a widening megaphone which McHugh labels “The Jaws of Death.”