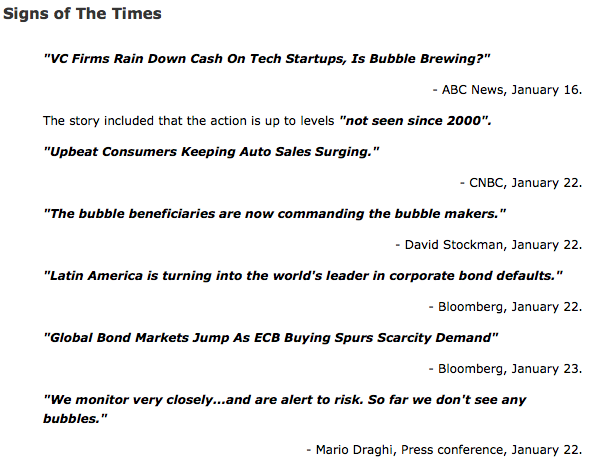 The following is part of Pivotal Events that was published for our subscribers January 29, 2015. Draghi claims that there are no bubbles. Perhaps this is an improvement in central bank comprehension. In the midst of the Tech-Bubble, Chairman Greenspan stated that you could not identify a bubble until it was over.

The first great financial bubble was the South Sea Bubble of 1720 and it was described by many participants and observers as a “bubble”. That was in real time.

The Shorter Oxford Dictionary defined a bubble as “A delusive commercial or financial scheme” and dated as 1599.

William Robert Scott in his masterful “THE CONSTITUTION AND FINANCE OF ENGLISH, SCOTTISH AND IRISH

“The use of the term “Bubble” in this connection is often supposed to have been the creation of the South Sea period, and it is sometimes derived from “Bob”. Shakespeare has a “bubble reputation”, and Wycherley describes one of his characters as “Bubbled of his mistress”. The plates in Het Groote Tufereel der Dwaashied, 1720, show that the word was understood literally, and was closely connected with air bubbles – as something un-substantial, which was capable of “being blown up” rapidly and was liable to burst.”

The inability of central bankers to be forthright about financial bubbles and manias is astonishing. But they live in strange world whereby the “Random Walk Theory” insists that there is no history of recurring bubbles and there will be none in the future. Beyond these absurdities is the notion of a national economy isolated from other economies and most importantly financial markets.

One big concern is about the arousal of the public’s “inflation expectations”. The other main one is the fear of deflation. And why are they fearful of deflation? Because they can’t figure out how to tax it.

Of course such “inflation” only happens in the CPI and never in financial assets. And that is why they can’t call a bubble a bubble.

The bubble in global bond markets has not only been the biggest such bubble but it is also the largest by market cap of any in history.

Junk bonds reached their best in June and have reversed trend. The bubble in senior obligations is still on.

In Tuesday’s “Special” we noted that the experiment in positive feedback was still being pushed to the limit. It is worth emphasizing that while some in the central banking community may be sceptical, the leaders remain adamant that recklessness will accomplish enough GDP growth to then step back. Of course, this extreme began as a heroic effort to prevent the 2008 Crash from lasting “forever”. Bond buying has continued to the point of absurdity, which many veteran writers have been noting.

There is a saying from the old and highly speculative Vancouver Stock Exchange.

“So long as the stock is going up, the public will believe the most preposterous story.”

In literature and theatre it has been called “suspension of disbelief”. We are reluctant to provide a similar description for central banking but the conveyance of “belief” is through the overly-frequent FOMC meetings and shopworn economic theories.

Whatever the venue, once the spell is broken, the game is over.

Our recent theme has been that Exuberance and Divergences have been recorded. These are only found in and around cyclical peaks in the stock market. Divergence is the next step in the process from peak to Resolution.

Resolution is inevitable and won’t arrive due to central banks discovering prudence. Our view has been that without speculators leveraging up the Fed could not carry out its portion of the credit and stock bubble. Eventually the speculators (outside of central banks) become exhausted and the play collapses.

And then the overall story is seen as absurd.

Preposterous 2.0 is about to start.

Comments in yesterday’s FOMC are interesting and notes that it was the shortest since 2012 and that S&P liquidity on an FOMC day was “the lowest ever”.

Initially it was interpreted as “dovish”.

It is possible that some economic numbers are warm enough such that the Fed sees success and can back off on the intense promotion.

We see that commodities are weakening, again.

The NYA represents the overall stock market and it has been replicating the pattern seen at its peak in 2007 and 2000. Last week’s rally made it to a little above the 50 and 200-Day moving averages. Rally attempts on Monday and Tuesday failed at those lines. Wednesday’s slump shows considerable weakness.

This time around, the take out of the 50-Week is being worked on this week at a decline of 4.6%. Actually, this needs to be tested to conclude the pattern.

Last week we noted that banks and financials were not acting well. The BKX led the overall market in 2007. On this move, the index is well below the 50-Week, which has been tested.

Canadian banks, as represented by RY, is acting as poorly as in 2007. In January 2008 the decline had taken out the 52-Week low, which was a critical level in that bear.

Now at 59 in US$, the low last year was set in February at 58. Clearly this is important support.

The Oil Patch (XLE) followed the 50-Week ma all the way up to its high of 100 in June, which registered an Upside Exhaustion. That key moving average was violated in October.

Stability was found at the 72 level in December and in early January. Recent rallies were turned back at the 50-Day ma, which is declining. The sector could suffer the full cyclical decline that the Precious Metals experienced.

For the overall US market, the critical level for the NYA at 10400. It is now at 10600 and in taking out support, the big Rounding Top becomes another completed Rounded Top.

A natural target for the DX has been the 92 to 94 level and it made it to 95.7 on Monday. This is up to 83 on the Weekly RSI, which is overbought. But it has been this overbought since June, which is when we noted that the action in a number of price-series could go exceptional – some up, some down.

A trading range for some weeks could ease the near-term overbought condition, but the long-term trend is up.

The Canadian unit continues to slide and while becoming the most oversold on the Weekly and Monthly RSI numbers since 1998, the trend is down. There is support at the low of 2009 which was at the 76 level.

By a couple of measures, Mark Carney was the best central banker in Canada’s history. Handsome with a pleasant speaking voice in English or French. This is important when listening to centralbankspeak. His track record is likely no better or worse than any who headed up the Bank since its inception in 1934.

However instead of being sceptical of a boom in commodities he fell for the excitement and in September 2012 advised:

“The demand for commodities can be expected to remain robust and prices elevated.”

On the 20th, we sent out a comprehensive review of the Treasury market that asked the question about “Ending Action?”. The great rise in interest rates from 2.5% in 1946 was essentially another secular trend that was accompanied by a massive and continuous effort to keep rates from rising. Constant accommodation drove commodities to the moon, which added to the natural rise in interest rates. The natural high might have been around 6%, the actual high was 14%.

On the secular decline in yields in the senior currency that goes with any post-bubble contraction the natural target would be around 2.5%. Yields at 0.35% in Germany and 1.31% in Spain are clearly exceptional.

However, it has been the biggest tout by government since the late 1940s when the US was going to keep rates from rising above 3%. Also coming to mind is the massive bear raid against gold that drove gold down to 253. Those that acted with the central banks were again wrong.

When commodities started the bear market in 2011 long Treasuries would likely rally. Inspired by the 2008 Crash, central banks dragged out the old remedy of buying bonds. Then in the face of a weak recovery they kept buying bonds. They now “have a tiger by the tail” and they can’t let go.

What possibly could be the economic benefit of driving the German yield from 0.35% to 0.25%?

With the month-end numbers in, Ross can update the technical review on US Treasuries. The Weekly RSI has been at this extreme only three time before on the great bull market that began in 1981.

We have been looking for “ending action” and it is getting closer.

“We have to recognize that the era when central bank improvisation can be the world’s growth strategy is coming to an end.”

Sunday’s ChartWorks noted excesses in gold’s rally as well as in the Commitment of Traders numbers. The advice was that gold could decline to the 1200 to 1225 level.

This seems to be within the process of setting a cyclical bottom for the gold sector.

However, today’s trade in silver relative to gold is worth a serious look.

One of the signs of a pending credit contraction becoming more serious is the sudden drop in silver’s price relative to gold’s. As we write, gold is down 21$ and silver is down 95 cents. The changes amounts to 2 percent and 6 percent, in round numbers.

By this measure, there are two warning steps to contraction.

One is the increase in volatility in the gold/silver ratio. The next is a sharp rise in the ratio. Both seem to be underway.

In which case, precious metal stocks will be weak.

The old HUI rallied from 146 in November and a test at 150 in December to 211 last week. The Daily RSI had a significant increase and became somewhat overbought. The rally made it to a little above the 200-Day ma, retreated and the next attempt stalled at that line.

We now look for the next opportunity to buy a little more.