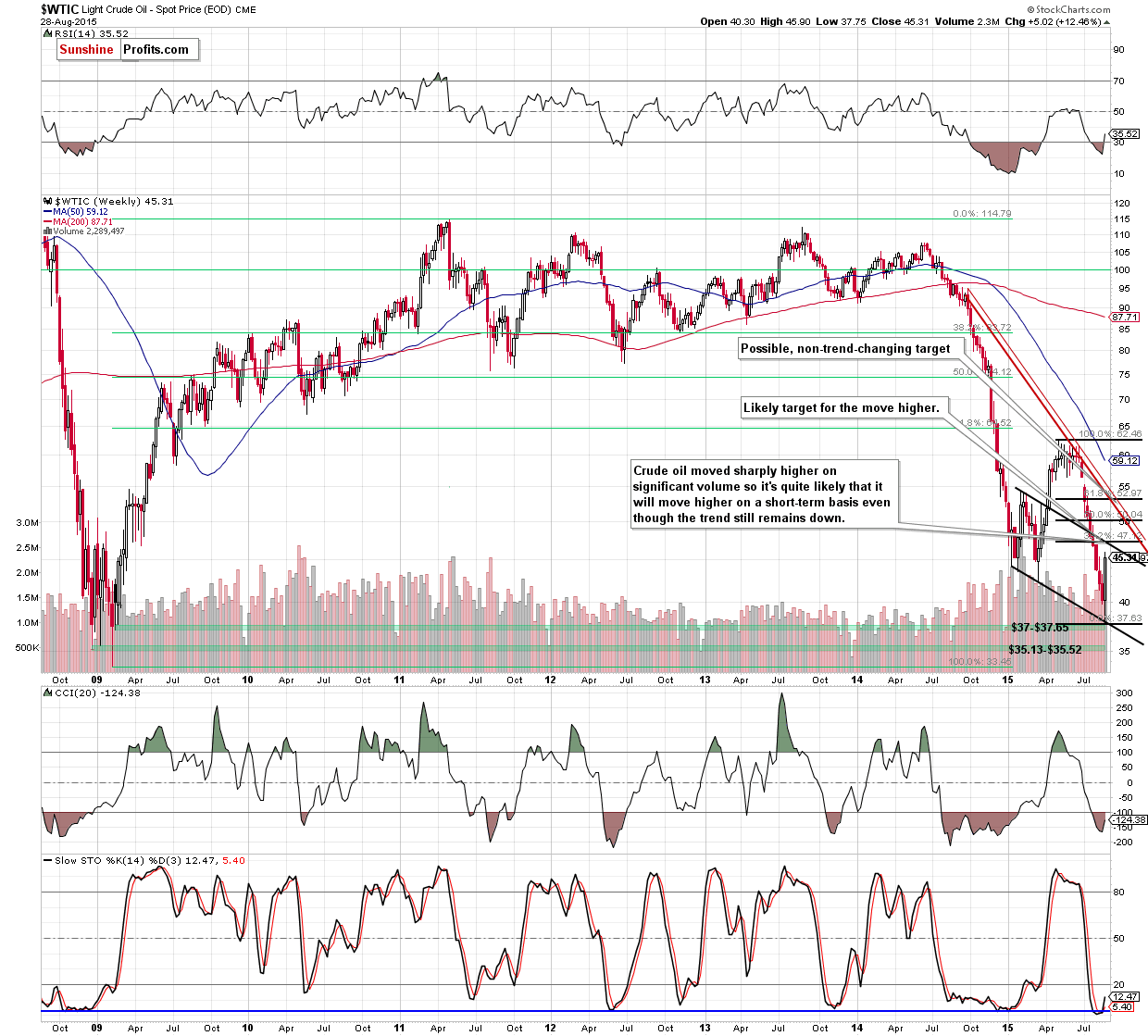 Trading position (short-term; our opinion): No speculative positions are justified from the risk/reward perspective.

The crude oil moved sharply higher on Thursday and Friday and it erased many daily declines during these 2 sessions. Nobody can deny that these moves were significant, but what about their implications? Are they significant as well?

In short, we think that they are meaningful to the extent that they changed the very short-term trend, but they didn’t change the medium-term one. We got stopped out of our previous short position, but we believe that it was good decision for us to place the stop-loss order at these levels in the first place as they correctly took us out of the market when the outlook changed. Besides, the loss on this position is small compared to the profits that we made on the previous short position – it’s just a part of the process (there have to be losing trades every now and then; it’s important to have profits over the long run).

If the medium-term trend didn’t change, then why isn’t to a good idea in our opinion to stay on the short side of the market? Let’s take a look at the chart (chart courtesy of http://stockcharts.com). The answer is that because of last week’s strength, crude oil is likely to move even higher temporarily (on a short-term basis) before turning south again. The next meaningful resistance level is a few dollars higher (at $47 or so due to the combination of the 38.2% Fibonacci retracement level and the declining resistance line) and since that’s a quite likely target we see no point in holding a short position open – instead, we will focus on the confirmations of the local top and re-entering the short position and more favorable prices.

Confirmations are particularly important because crude oil could easily move even higher – to $52 or so and still remain in a medium-term downtrend and we don’t want to get in the market several dollars too early.

Given the sharpness of the recent rally, it could be the case that the above-mentioned target levels will be reached relatively soon, if we get bearish confirmations shortly as well, we’ll likely re-enter the short positions with even greater profit potential than the previous positions had. As always, we’ll keep you informed.

Summing up, crude oil rebounded sharply in the final part of last week and the very short-term trend is now bullish. Consequently, we believe that waiting with re-entering short positions for even higher prices is currently the best approach to the crude oil market. Well keep you – our subscribers – informed.