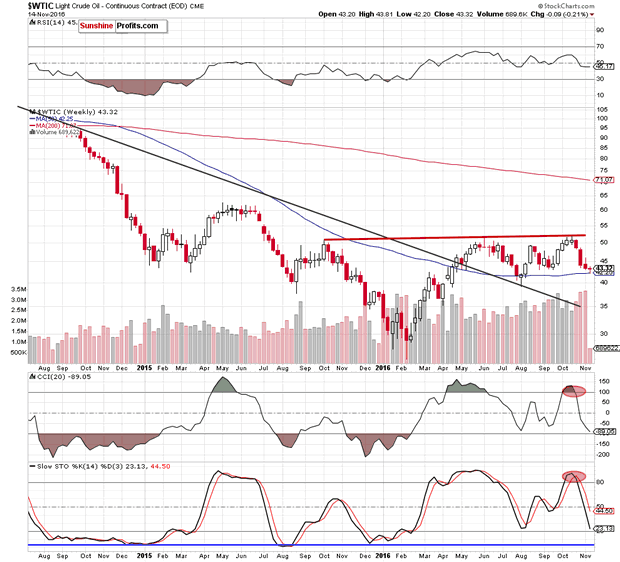 Trading position (short-term; our opinion): Long positions (with a stop-loss order at $41.39 and initial upside target at $49.53) are justified from the risk/reward perspective.

Although crude oil moved lower after the markets open, oil bulls stopped further deterioration and triggered a rebound in the following hours. As a result, light crude erased most of earlier losses and closed the day above Friday’s low. What can we expect in the coming days?

Let’s examine the charts below and try to find out (charts courtesy of http://stockcharts.com). Looking at the weekly chart, we see that although crude oil moved little lower this week, the 50-week moving average continues to keep declines in check.

Are there any other technical factors that could encourage oil bulls to act in the coming days? Let’s examine the day and find out.

Yesterday, we wrote the following:

(…) Today’s move lower in crude oil below $43 (to about $42.50) could be viewed as a breakdown below the September lows, but we don’t view it as such – at least not yet. The reason is that today’s session is far from being over and the move below $43 was almost invalidated. Depending on the closing price, we could see (…) a reversal and invalidation of the intra-day breakdown, which would be very bullish.

From today’s point of view, we see that the situation developed in line with the above scenario and crude oil rebounded, invalidating the intra-day breakdown below the September lows, which is a bullish signal that suggests further improvement.

Additionally the current situation in the non-USD (WTIC:UDN ratio) chart of crude oil also supports the pro-growth scenario. Why? Let’s take a closer look at the charts below and find out.

From the weekly perspective, we see that although the ratio moved lower and erased almost all of the last week’ gains, the green support zone (reinforced by the 50-week moving average) continues to keep declines in check, which is a positive signal.

On top of that, the first thing that catches the eye on the daily chart is a positive divergence between the ratio and the price of crude oil. As you see, although the black gold hit a fresh low yesterday, we didn’t see such price action in the case of the ratio, which is a bullish signal that suggests further improvement. Why we think so? When we take a closer look at the above chart, we can notice a similar situation in September (both cases we marked with green rectangles). Back then such event encouraged oil bulls to act, which resulted in a rebound that finally took the ratio (and also crude oil) to fresh 2016 highs. Additionally, a buy signal generated by the CCI remains in place, supporting oil bulls and another attempt to move higher.

Therefore, if we see such price action, the upside targets from our Thursday’s alert would be in play:

Summing up, crude oil moved higher and invalidated earlier breakdown under the September lows, which in combination with the current situation in the WTIC:UDN ratio suggests that higher prices of the black gold are just around the corner.

Trading position (short-term; our opinion): Long positions (with a stop-loss order at $41.39 and initial upside target at -$49.53) are justified from the risk/reward perspective.