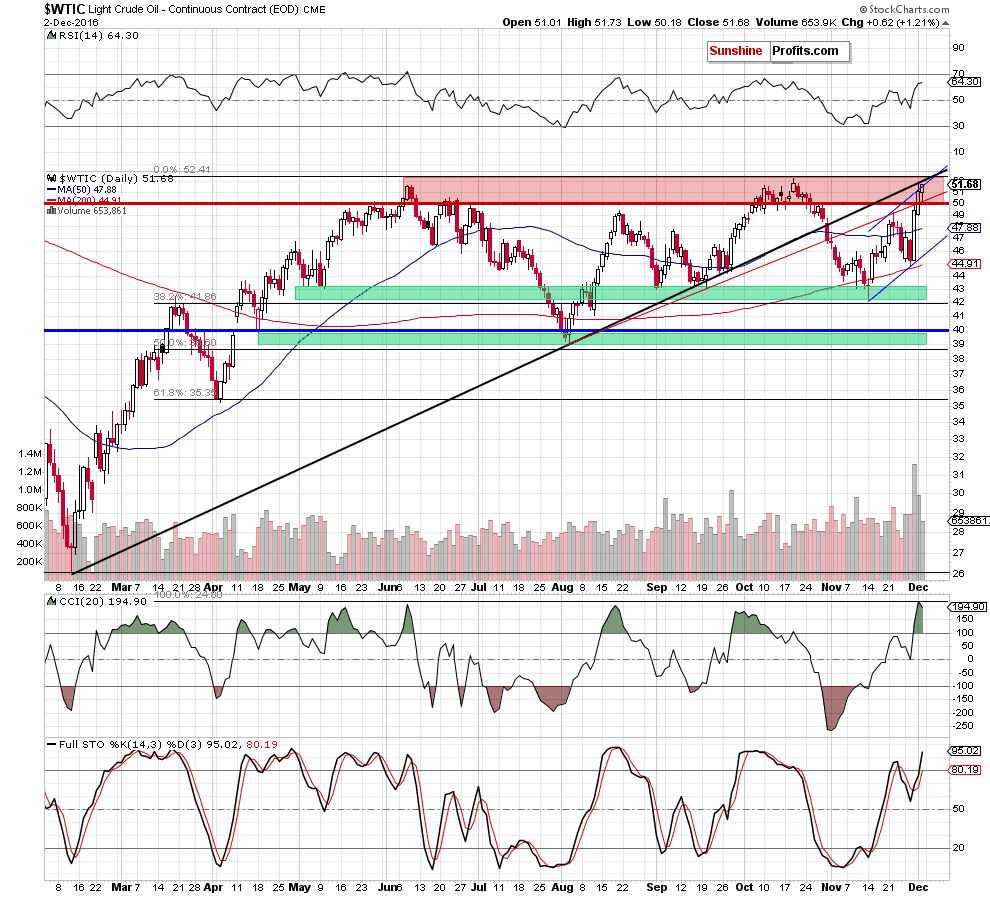 On Friday, crude oil gained 1.21% as OPEC deal continued to support the price of the commodity. In this environment, light crude re-approached the Oct high. Will we see fresh 2016 peak in the coming week?

Let’s take a look at the charts below to find out (charts courtesy of http://stockcharts.com). On Friday, we wrote the following:

Such price action means that light crude invalidated the breakout above upper line of the blue trend channel and suggests a verification of the breakdown under the black resistance line which doesn’t bode well for oil bulls. If this is the case, we may see a correction of recent rally and a drop to the previously-broken red line based on the Aug and Sep lows (currently around $50.15)

From today’s point of view, we see that the situation developed in line with the above scenario and crude oil moved lower after the market’s open, reaching our initial downside target. Despite this drop, the proximity to the barrier of $50 encouraged oil bulls to act, which resulted in a rebound and a comeback to the Thursday’s high.

As you see, with Friday’s increase, the commodity also moved above the previously-broken upper borer of the blue rising trend channel, invalidating earlier breakdown. Although this is a positive development, which suggests further improvement and a test of the Oct high, we should keep in mind that the medium-term black resistance line based on the Feb and Aug lows remains in play, keeping gains in check (as a reminder, as long as there is no daily closure above this line all upswings could be nothing more than a verification of earlier breakdown).

Additionally, this area is also reinforced by the long-term red resistance line (based on the previous peaks), which successfully stopped earlier rally in Oct.

On top of that, the size of volume that accompanied recent increases (since Wednesday) has steadily decreased, which suggests that the rally can go without steam and reversal in the coming days should not surprise us. If this is the case and we see a correction of the recent rally, the initial downside target would be the previously-broken red line based on the Aug and Sep lows, the Nov 22 high of $49.20 or even the 50-day moving average.

Summing up, crude oil bounced off the previously-broken red rising line and re-approached the Oct high. Despite this move, the medium-term black resistance line based on the Feb and Aug lows and the long-term red resistance line based on the previous peaks continue to keep gains in check, which means that as long as there won’t be a breakout above them further rally is not likely to be seen.