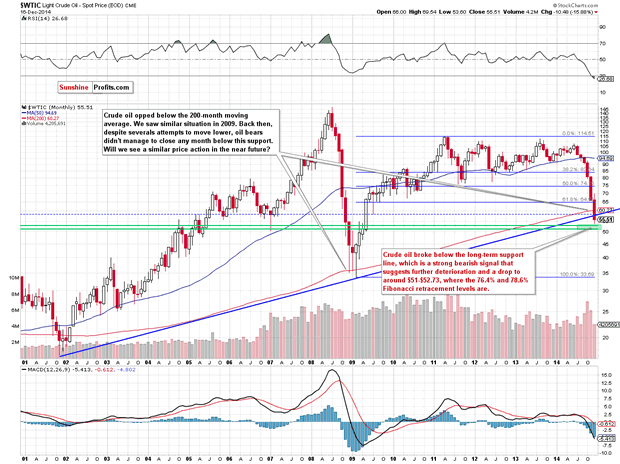 The price of crude oil declined yesterday once again – was the bottom reached yet?

In our opinion – not yet, but it could be the case that we’ll see some kind of pause shortly. The big picture provides us with the same implications as it did yesterday (charts courtesy of http://stockcharts.com): The first thing that catches the eye on the above charts is a breakdown below the long-term blue support line (based on the 2002 and 2009 lows and marked on the monthly chart) and the 70.7% Fibonacci retracement based on the entire 2009-2014 rally (marked with green on the weekly chart), which suggests further deterioration in the coming day (or days). If this is the case, the commodity could drop to around $51-$52.73, where the 76.4% and 78.6% Fibonacci retracement levels are.

If the long-term outlook is that bearish, then why can we expect a pause here? Because on a short-term basis we saw a daily reversal (doji candlestick) on significant volume. Since doji on high volume is a reversal sign, we could see one, but since the momentum is so strong in case of the crude oil market, it could be the case that the correction that we’ll see will be very limited – perhaps similarly to what we’ve seen at the beginning of the month.

Summing up, while we may see a corrective upswing shortly, it doesn’t seem that the decline in crude oil is completely over. The space for declines seems limited, and consequently we think that opening short positions at these levels is not justified from the risk/reward perspective.

Trading position (short-term; our opinion): No positions are justified from the risk/reward perspective at the moment, but we will keep you informed should anything change.