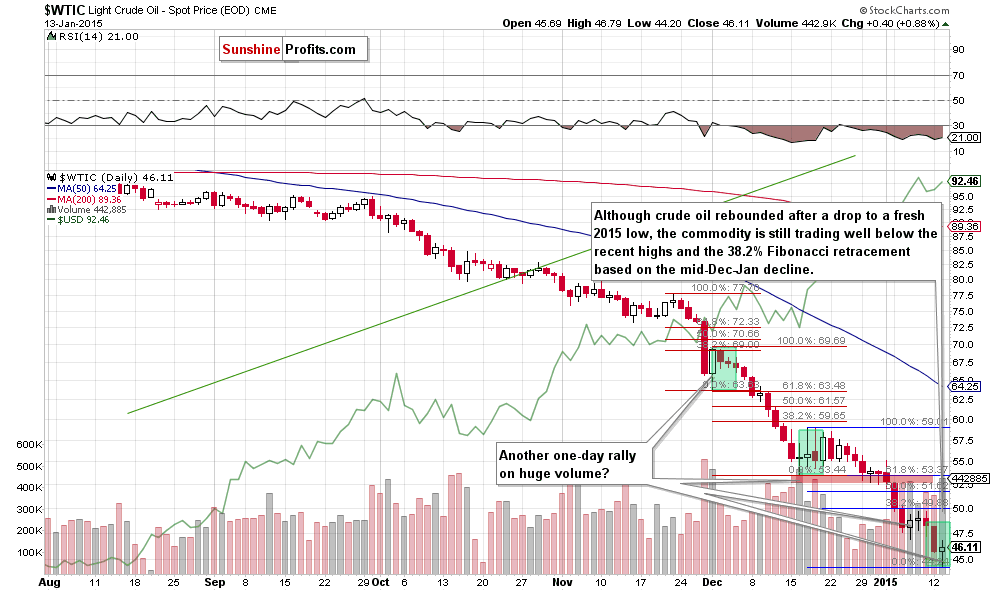 Trading position (short-term; our opinion): Short positions with a stop-loss order at $48.34 and an initial price target at $38 are justified from the risk/reward perspective at the moment.

Although ongoing worries over a glut in global supplies pushed crude oil to a fresh 2015 low, the commodity rebounded, finishing day above $46 per barrel. Is it another one-day rally or something more?

Yesterday, after the market’s open crude oil slipped to a fresh 2015 low of $44.20. Despite this drop, the commodity rebounded in the following hours supported by Chinese trade data, which showed that exports rebounded by 9.7% in December. Did this increase change anything? The answer to this question you will know in the technical part of today’s alert, meanwhile, let’s focus on major fundamental factor, which have weighed on prices in recent months – crude oil inventories. Yesterday, the American Petroleum Institute reported that last week crude stocks rose 3.9 million, while distillates gained 416,000 and gasoline increased 1.6 million. Therefore, if today’s EIA weekly report confirms these numbers and shows another increase in crude oil supplies (analysts expect the report to show that they rose by 417,000 barrels), the price of the commodity will likely move lower once again. Nevertheless, we should keep in mind that a smaller-than-expected increase or a decline will support the price and trigger a corrective upswing. Which scenario will we see later in the day? Before we know the answer to this question, let’s take a closer look at yesterday’s price action (charts courtesy of http://stockcharts.com). Looking at the daily chart, we see that although crude oil moved lower after the market’s open, the commodity rebounded, invalidating the breakdown below the previous low of $44.20. Additionally, yesterday’s white candle mateialized on huge volume, which together seem to be a bullish signal. But is it really so positive? When we take a close look at the daily chart, we notice that we saw similar one-day rallies in the previous weeks. Back then, although they paused (or triggered a small corrective upswings) further deterioration, in fact, they were only another stops before new lows. Taking the above into account, and combining it with the fact that crude oil is stil trading well below the recent highs and the 38.2% Fibonacci retracement (based on the mid-Dec-Jan decline), we think that lower values of the commodity are still ahead us. In our opinion, this scenario is currently also reinforced by the medium-term picture. Let’s take a look. From this perspective, we see that despite yesterday’s upswing, crude oil remains under the Apr 2009 lows, which serve as the nearest resistance at the moment. Therefore, as long as there is no invalidation of the breakdown below this area, a test of the barrier of $40 in the coming days is more likely than not.

Summing up, short positions are still justified from the risk/reward perspective as crude oil remains under the previously-broken Apr 2009 lows, the recent highs and the 38.2% Fibonacci retracement based on the mid-Dec-Jan decline. If the commodity moves lower from here, the first downside target for oil bears will be around $40.

Trading position (short-term; our opinion):Short positions with a stop-loss order at $48.34 and an initial price target at $38 are justified from the risk/reward perspective at the moment. We will keep you informed should anything change.