Oil bounce is overdue. If it Bounces CAD is the Horse to Ride. 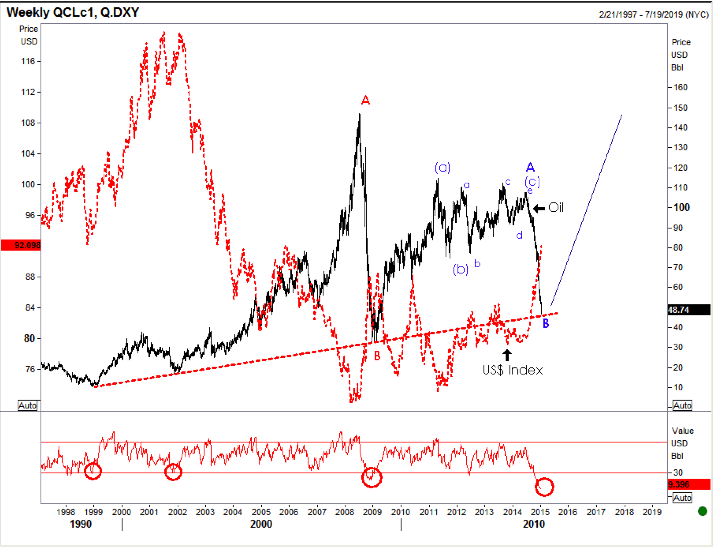 They exist without moralizing.

They act regardless of our wishes

within the ebb and flow

of every pregnant moment…

Oil bounce is overdue.  If it bounces CAD may be the horse to ride.

Just in case you’ve been stranded in outer space for the last several weeks, you probably didn’t realize the price of oil has been heading south.  And in fact today, oil prices challenged a technical uptrend line going all the way back to the beginning of 1999 and bounced (a little).

The uptrend line in crude oil, as seen in the chart below, was created by drawing a line from the 1999 low (December 18th 1998 to be exact) touching the low made in November 2001. Today’s low in oil was the second major test of the trend—the last came back in 2008 during the credit crunch (and they say markets have no memory; at least that’s what Professors who don’t trade like to say).   Also in the chart I have overlaid the US Dollar Index (red) and it shows a pretty nice negative correlation to oil. Given that everyone with a pulse seems bearish on oil (even the “Peak Oil” nuts from the newsletter houses have been appropriately mugged by reality) what a great place for a rally to begin.  It would confirm the magic of the market process indeed—the yin and yang aspects, so to speak. Of the major currency pairs, the Canadian dollar may be the best horse to ride if a US dollar correction does materialize.  In the chart below you can see USD/CAD’s correlation with oil prices, i.e. lower oil  prices and weaker CAD against the US dollar, and vice versa.

USD/CAD versus WTI Crude Oil Futures: In the bottom pane of the chart it shows there has been a whopping 95.7% correlation between the two price series.  That’s what you call tight. I’m not saying this is the moment for a big rally in oil.  But I am saying a rise in the Canadian dollar is highly likely when (if) crude moves northward again.