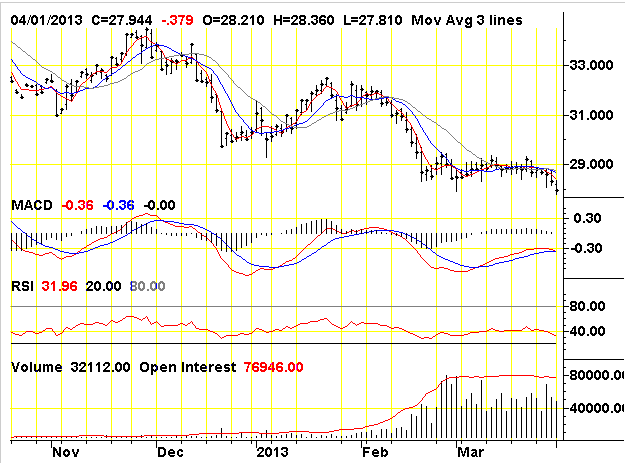 Silver “Acting More Like Base Metal than Store of Value” U.S. DOLLAR prices to buy gold dipped back below $1600 an ounce Tuesday morning, though they remained close to that level by lunchtime in London, as the physical bullion market re-opened following the Easter break.

“We saw buying interest from the general public on TOCOM this morning,” says one dealer in Tokyo, referring to the Tokyo Commodity Exchange.

“But then it disappeared. [People] don’t want to buy or sell because of the matters concerning North Korea.” North Korea said over the weekend that it is in a ‘state of war’ with South Korea, technically true since the 1950-53 Korean War ended with an armistice rather than a peace treaty. Pyongyang, which conducted a third nuclear test in February, has also said it will restart all facilities at its Yongbyon nuclear complex.

In the south, “people do seem a bit more concerned than before,” says one BullionVault contact based in Seoul, adding that a colleague of his has “bought lots of noodles and canned food ‘just in case'”.

“People’s fear is more based on the fact that the North has done small attacks in recent years to force a return to the negotiating table, and that if they do the same again, it could escalate this time because the South’s new president will need to show a reaction.”

On the Comex exchange, the so-called speculative net long position of gold futures and options traders, calculated as the difference between the number of bullish and bearish contracts held by hedge funds and other money managers, fell by 0.2% to the equivalent of 397.3 tonnes in the week ended last Tuesday, weekly data published by the Commodity Futures Trading Commission show.

Silver meantime fell below $28 an ounce Tuesday, trading near seven-month lows, while other commodities were broadly flat on the day. “In the past two weeks silver has been performing more like a base metal and less like a store of value,” says today’s commodities note from Commerzbank.

(Ed Note: Below is what silver looked like trading Tuesday 6:35 am PST) “Silver’s underlying demand/supply fundamentals remain weak…inventory is abundant,” says Standard Bank’s monthly Precious Metals Definer, estimating that China’s surplus is equivalent to 18 months’ of fabrication demand. “The situation within China implies that one of two scenarios should happen before silver can rise substantially higher on a sustainable basis:

(1) internal demand (fabrication and investment demand) must grow faster to decrease the stockpiles, or

(2) China must become a net exporter of silver again.” Standard’s analysts add that the second scenario “would only imply that the metal has shifted location and not been consumed — the result of which would be price neutral at best.”

Although the Dollar silver price ended the first quarter down more than 4%, the US Mint recorded its strongest quarter for silver coins sales since it began keeping records in 1986.

Over in Europe, the Eurozone unemployment rate hit a record 12% in January, according to revised figures published this morning, maintaining that level in February.

India is unlikely to raise gold import duties again, having raised them to 6% in January, according to the country’s finance minister.

“There are limits to which tariffs can be raised on gold,” P. Chidambaram told Reuters Tuesday, “because if you raise tariffs prohibitively, gold smuggling will increase.”

Turkey imported 18.26 tonnes of gold last month, up from 17.34 tonnes a month earlier, according to data from the Istanbul Gold Exchange. Turkish gold imports in 2012 were up 51% from a year earlier at 120.78 tonnes. Turkey’s gold exports also jumped last year, with reports suggesting it was using gold in trade with sanctions-hit Iran.