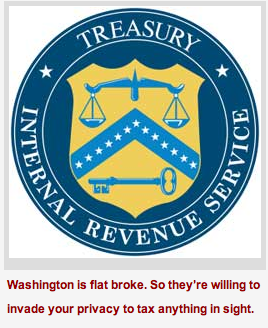 “Washington’s witch hunt can — and is —  hurting the securities markets.

The National Security Agency’s order for Verizon to turn overall customer records is an abomination on the rights and liberties of every American. I am outraged. I’m sure you are too.

I have never felt such anger at Washington. Our founding fathers must be turning over in their graves. What have we come to? Is America now a fascist state? Are we heading toward communism?

When will it stop?

I’m afraid it won’t. If you think there’s been a loss of privacy and liberty since George W. Bush took office 13 years ago, brace yourself ? it’s about to get a lot worse.

It’s what happens when governments start to fight for their survival. It happened in Rome. In Byzantium. In the Weimar Republic in Germany. And in countless other countries where governments became desperate for revenue and started losing the confidence of their citizens.

They start invading upon citizens’ privacy and liberties. They start regulating everything in sight. And they start taxing just about anything that moves. Why is it about to get a whole lot worse for us Americans? There are several reasons.

First, as you well know, Washington is dead broke. If it weren’t for the Federal Reserve buying $85 billion in Treasuries each month and the good graces of China and other countries still extending credit to Washington ? the government would have shut down long ago.

So Washington is preparing to head off the same here, expecting social unrest to eventually strike our country. The Department of Homeland Security is loading up with tanks and millions of bullets, real and rubber.

Drones can now fly right over your home or business, and monitor your comings and goings.

Have a nice car that the IRS might think is too expensive for your lifestyle based on your tax return? Be careful. A drone could be reporting it to the IRS, triggering an audit.

Laptops and cell phones can be confiscated and searched ? without a warrant ? when you return from your overseas vacation.

The FBI and National Security Agency are monitoring the servers of nine huge American Internet companies, monitoring audio and video chats, how you surf the web, what you surf for and more.

Wiring money overseas for as little as $3,000 is now reportable to the government by your bank.

We live in a virtual fascist police state.

Of course, those in power in Washington will always claim that it’s all in defense of our country, to ferret out terrorism. But that’s a ruse.

It’s exactly the opposite: It’s to terrorize you into complying with every inch of red tape the government issues.

To pay every penny of tax and more they think you owe.

And to ultimately force the U.S., and eventually the global monetary system, into a cashless digital currency so they can track every penny of wealth you have.

But it’s not only happening in the U.S. It’s also taking place in France, Germany, Italy, Spain, and just about every country where governments are having financial trouble.

And it’s amazingly ironic that a true communist country like China ? for all its faults ? is going in the opposite direction. Becoming more democratic, more free, more supportive of business.

Don’t get me wrong: The U.S. is still the greatest country on the planet. I am American and always will be. Though I live overseas, I have no plans whatsoever to give up my citizenship and become an expatriate.

But I don’t like where our country is headed, not by a long shot. I am outraged.

And whether you are or you aren’t, I think it’s also critically important that you understand how Washington’s witch hunt can — and is —  hurting the securities markets.

I see three major consequences of Washington’s ? and other governments’ ? efforts to track and tax your wealth:

First, it’s going to do exactly the opposite of what the government intends. It’s going to send more and more small-business transactions underground.

It’s going to create more and more barter. More attempts at private digital currencies like Bitcoin. It’s going to send money into hiding, to the extent possible these days.

Second, it’s going to send more and more money ? and assets ? offshore. Yes, any money you place offshore, any gold or silver bullion, needs to be reported to the IRS.

But that won’t stop money and precious metals from heading offshore. In the minds of most investors ? and I agree ? the further away from Washington’s reach your money and many of your assets are, the better.

Third, and most importantly, it’s going to have a mind-boggling effect on nearly all financial markets.

Namely, it’s going to drive capital in a way that is constantly seeking out what I call “portability and fungibility.”

Portable wealth is money and assets that can be easily transported, and more easily hidden from view. Examples: Artwork, diamonds, jewelry, gold and silver coins, numismatics and more.

But portability does not stop there. Portability can also be assets that are deemed non-confiscatable, such as stocks. Own a government bond, and Washington knows you own it. Own a share in Apple, and it’s unlikely Washington will subpoena Apple for a record of your shares.

But even if it were to do so, you have an option: You can take possession of your Apple stock certificate, and get out of your brokerage account and be somewhat further removed from the government’s prying eyes.

That’s one of the reasons there’s been a rise in shareholders taking street delivery of their stock certificates over the past year or so: To get it off the grid, so to speak.

It’s also one of the reasons I see the stock market doing well for years to come. It’s a private-sector investment. Not only are there loads of companies in better shape than the U.S. government, stocks are considered an asset class free from government confiscation.

Stocks ? and especially gold and silver ? are also fungible. When you need cash, digital or otherwise, stocks and gold and silver are easily converted back to a more easily used medium of exchange.

Portability and fungibility are going to be major forces behind the next bull leg higher in gold and silver, which is now closer than ever.

Ditto for stocks. Speaking of which, the short-term correction I warned you about in my last column appears to have arrived.

The S&P 500 Index closed below 1,644.50 ? the signal I gave you in my last column ? and then promptly fell even further, shattering the

The market is now positioned for a solid pullback of as much as 10 percent. But don’t let it throw you off-base. For many of the reasons I just mentioned, and others I’ve written about, the U.S. equity markets are headed much higher over the long-term.

Not despite the problems our country has, but because of them!

If you acted on my suggestion last week to purchase shares in the triple-leveraged inverse ETF, the ProShares UltraPro Short S&P 500 ETF (SPXU), then you’re sitting pretty. Hold that ETF.