Nothing is Proof Against Busts 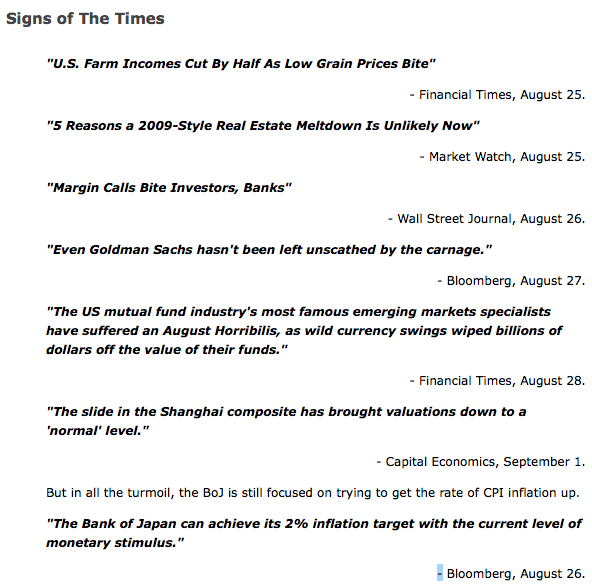 The following was published for our subscribers September 3, 2015. Will the “August Horribilis” turn into an Annus Horribilis?

In which case, the Annus Mirabilis would be over.

The above observation that stocks are down to better valuations is typical of the initial collapse in speculation. Usually made by those who are surprised by the move.

Perhaps the most important part of the setback is that it is global. This should condemn the notion of a national economy forever. Of course interventionist economics was founded on this specious concept. Then there are the widely-publicized efforts by Chinese authorities to prevent the natural collapse of speculation.

The transition from the Great Complacency has been a severe shock to the financial and economic establishment. Is it enough to have cleared the problems consequent to excessive speculation?

On “Black Monday” (August 24), the plunge in the S&P drove the Daily RSI down to the lowest reading since late August 2011. The eventual low was set in that October. That was a seasonal correction in the cyclical bull market.

Quite likely, the June blow-out in Shanghai completed a fabulous bubble. In which case a cyclical global credit contraction would follow. So far the ups and downs in the SSEC are following the pattern that followed the blow-outs of gold in 1980 or the Nikkei in 1989, for example.

It is uncertain how tightly the ups and downs will follow the pattern but all of the excesses built up in any bubble eventually get fully washed out. These have happened in unplanned economies in 1825 and in 1873, mixed economies in 1929 as well as in unconstrained mercantilism in 2007. It seems that classic crashes can occur in Communist financial bubbles as well.

No ideology is proof against booms and busts.

Last week, we thought that with the oversold, just the Jackson Hole event itself would prompt a relief rally. Whatever was said would have little actual influence on financial history. Relief could run for a week or so. This could be the appropriate setup for seasonal pressures later in the year.

Of technical interest, the two rebound rallies on the S&P were curbed by the Keltner Channel which is declining. The low was 1867, the first high was 1993 and the low was 1903. At 1975 now it could roll over. Clearly, taking out 1903 would be a strong alert to more pressures.

Canada’s largest bank (RY) reached its best with the “rotation” in commodities in May. The high was C$80 and the low on the bad day was 68. Now at 72.

Altogether this amounts to serious damage to global equity markets.

This week’s list of headlines includes one about better valuations now available in China. In the fateful summer of 1873 a New York newspaper editorialized that nothing could go wrong. The US did not have a mere central bank. It had the highly-regarded Treasury System which could issue any amount of liquidity by buying bonds. In October the same paper observed that stocks were now more attractively priced.

That contraction started with the crash in 1873 and lasted until the recession low of 1895. In 1884 senior economists in England began calling it the Great Depression.