Not Your Run of the Mill Sell-Off 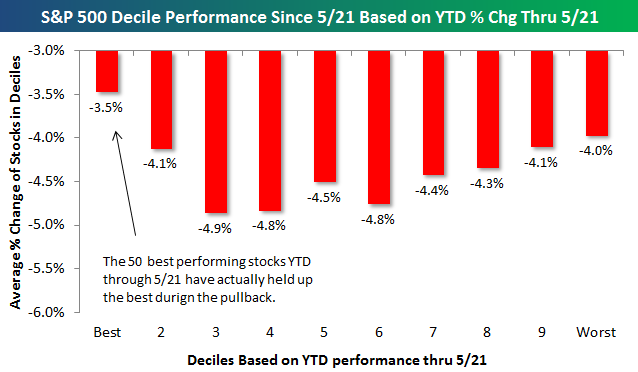 The average stock in the S&P 500 is down 4.34% since the index made an all-time closing high on May 21st.  Typically during market pullbacks, the stocks that went up the most during the preceding rally end up getting hit the hardest.  That hasn’t been the case during this pullback, however.  We broke the S&P 500 into deciles (10 groups of 50 stocks each) based on 2013 YTD stock performance through 5/21.  We then calculated the average performance of the stocks in each decile since the 5/21 market peak.  As shown in the chart below, the 50 stocks in decile 1, which is made up of the stocks that were up the most YTD through 5/21, are only down an average of 3.5% since then.  That makes it the best performing decile of the group during this pullback, so 2013’s big winners have not gotten hit as hard as other stocks in the index. So if it’s not a “sell the winners” pullback, which stock characteristics are leading the market lower?  Over at Bespoke Premium, we just published a report answering this question. To view the full report, sign up for a 5-day free trial today!

While it was the world’s best performing equity benchmark just over two weeks ago, Japan’s Nikkei 225 has quickly moved into the doghouse of investors.  In fact, with average daily moves of just under 3% since 5/23, the Nikkei is just one bad day away from moving into bear market territory.