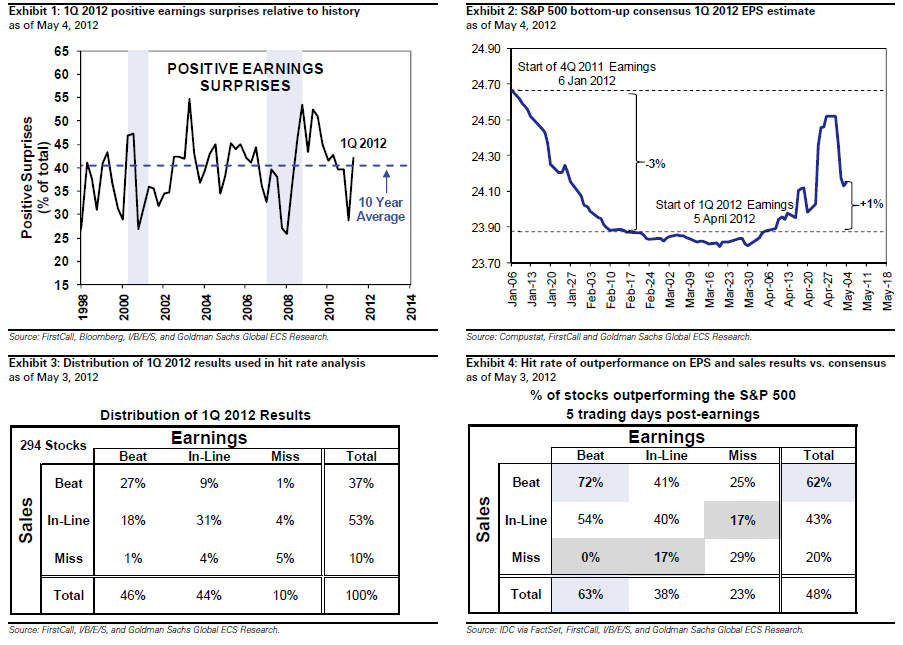 With earnings season now virtually over, it is time to ask why, despite a majority of the companies beating expectations, is the S&P inline with where it was when earnings season started. There are two main reasons why the market has not been impressed: the percentage of “beaters” is nothing spectacular on a historical basis as was shown previously, especially in the aftermath of aggressive cuts to Q1 top and bottom line forecasts heading into earnings reports; more importantly, even with Q1 earning coming out as they did, the bulk of the legwork still remains in the “hockeystick” boost to the bottom line that is completely Q4 2012 loaded, as bottom up consensus revisions to the rest of 2012 are negative despite Q1 beats. As Goldman summarizes: “1Q 2012 will establish a new earnings peak of $98 on a trailing-four-quarter basis. With 88% of S&P 500 market cap reported, 1Q EPS is tracking at $24.10, 1% above consensus estimates at the start of reporting season and reflecting 7% year/year growth.” So far, so good. And yet, “Despite the positive surprises, full-year 2012 EPS estimates are unchanged relative to the start of earnings season, and currently stand at $105 vs. our top-down forecast of $100. Over half of consensus 2012 earnings growth is attributed to 4Q. Margins at 8.8% have hovered near peak levels for a year, but consensus expects a sudden jump in 4Q to a new peak of 9.1%. We forecast a further decline to 8.7%.”

As a reminder Q4 is when all the unanswered questions are expected to clash violently: to NEW QE or not to NEW QE, the “5% of GDP” fiscal cliff, US elections and the 18th National Congress of China, the debt ceiling, and not to mention Europe which will be there all along. And let’s not forget Apple: “Apple is likely to be the top contributor to S&P 500 EPS this quarter. Exxon (XOM) had been the top S&P 500 EPS contributor since 2003, but Apple surpassed it last quarter.” If something happens to the coolness factor of AAPL, watch out below. Hopefully margins will somehow find a way to boost themselves to all time records among all this uncertainty.

Going back to Goldman, here are the firm’s nine takeaways from Earnings Season:

1. More surprises than average. The percentage of firms beating consensus EPS expectations by more than one standard deviation (our definition of a positive surprise) exceeds the historical average. The number of firms missing by more than one standard deviation is in-line with the average. Of the 421 firms that have announced results this quarter, 42% of firms beat expectations and 13% have missed. The ten year historical average of beat and misses equals 40% and 13%, respectively (see Exhibit 1).

2. Earnings above expectations. 1Q EPS is tracking 1% above the consensus estimate at the start of reporting season, $24.10 vs. $23.88 (see Exhibit 2). The median surprise over the past ten years has been 1.8%. The 1Q estimate fell by 3% between the start of the 4Q 2011 reporting season in mid-January and the start of the 1Q 2012 season in early April, which aided the level of surprise. Accounting differences between adjusted and operating results for PRU and PFE reduced aggregate earnings level.