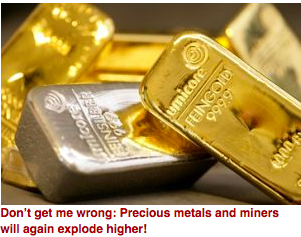 Don’t believe everything you hear and read about gold these days. It’s just not yet prime time for the precious yellow metal.

If it were — gold would have held my important cycle low point at $1,245 on October 5. It did not. If it were prime time for gold, it would have rallied when Trump was elected, due to the inflation expectations of many of his policies. It did not.

If it were ready for prime time, gold would have already rallied on the recent approval of a gold standard in Sharia, Islamic law. It did not.

And if gold were ready for prime time, miners would already be taking off to the upside again. They are not. Don’t get me wrong: The time is edging ever closer when the precious metals and miners will again explode higher. It could be soon, or, it could be from below $1,000 gold in the first quarter of the new year that’s coming.

Silver, copper, platinum and palladium will all follow. But gold will experience the most stable gains. It’s more of a monetary metal than the others, though most governments are working hard to eliminate it as such.

The key is being patient and separating the wheat from the chaff. All markets have their time in the sun, and it’s the major macro-economic cycles that drive them.

Right now, the macro-cycles are still largely targeting the imploding sovereign debt markets in Europe, Japan and the U.S. That will continue for years.

In turn, it’s driving most money into either cash or mostly, a handful of the biggest U.S. blue chip stocks.

However, once the Dow Industrials and S&P 500 take their inevitable breather — coming soon — I strongly suspect we will see a big shift back into the precious metals.

Be patient and follow my lead. There’s oodles of money to be made in the precious metals and in the mining sector.